IOST claims to unleash the power of blockchain with its classic technology. It is a decentralized, super-fast blockchain network based on next-generation consensus algorithm “Proof-of-Believability.” This project is developed by a team of highly talented, versatile and experienced crypto founders and has the support of world-class investors. It is aimed to be the underlying architecture for online services which are aware of the scalability and the security needs of a decentralized economy. 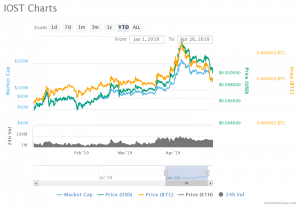 According to the latest news release of IOST, this is definitely a super application-friendly next-generation public blockchain network that has reportedly launched an ‘application-ready mainnet.’ It features ‘multiple live’ decentralized applications. This project has also caught wide attention of various talented software architects all over the world who can actually develop applications on its platform. It is on 6th April, this year, when IOST network had reportedly processed more transaction than ETH. So, one can well imagine the capacity of IOST. Just after this amazing performance, it registered 580,231 transactions on its network, compared to ETH which only did 558,272 transactions on the same day.

More than 25 million transactions got processed on its blockchain, and as per the press release, it has various benchmarks within a month after its mainnet launch. These benchmarks include the following-

With such a speedy performance and highly attractive features, it is of no doubt, that in future also, its progressiveness can beat the queen of the crypto, i.e., Ethereum to a major extent. We think that investing in this crypto can be a very good idea as it has been continuously adding supporters after reaching the benchmarks mentioned above. As per our IOST coin price prediction, it can trade around $0.032 by the end of this year.

IOST is a very promising cryptocurrency with lots of hopes from investors and crypto enthusiasts. It has already proved itself much worthy in compared to one of the leading cryptos. It is still developing, and many more updates will soon be launched. So, one can definitely consider investing in this crypto for a good amount of profit in the future.

People Believe In Several Useless Crypto Projects, Which Has Led Such Tokens To Be Included In The Top Ten: Report

Dogecoin (DOGE) Predictions: How Much Hope Is The New Update of Core 1.14 Giving To DOGE?