Internet of Things Application (IOTA) is a crypto technology that allows transactions between multiple devices. It addresses scalability and fees issues of blockchain technologies. One must verify two previous transactions to submit a new transaction on the IOTA ledger.

It uses Directed Acyclic Graph (DAG) for transactions. It randomly verifies each other’s transactions and builds a consensus through a web of connections. The creator of IOTA called it a Tangle.

This free and fast network is designed to process payments between machines and micro-payments which plays a vital role in the world economy.

IOTA aims to build a platform for M2M (machine to machine) transactions. It is interesting to note that IOTA is not based on blockchain technology, and it allows a large volume of transactions at a fast scale on IoT applications. It aims to resolve the issue of blockchain-related charging fees.

A German nonprofit organization, Crowdsale, launched it in 2015. The 50+ team members have been making progress for the last six years.

Let’s look at the price chart of IOTA to get more information! 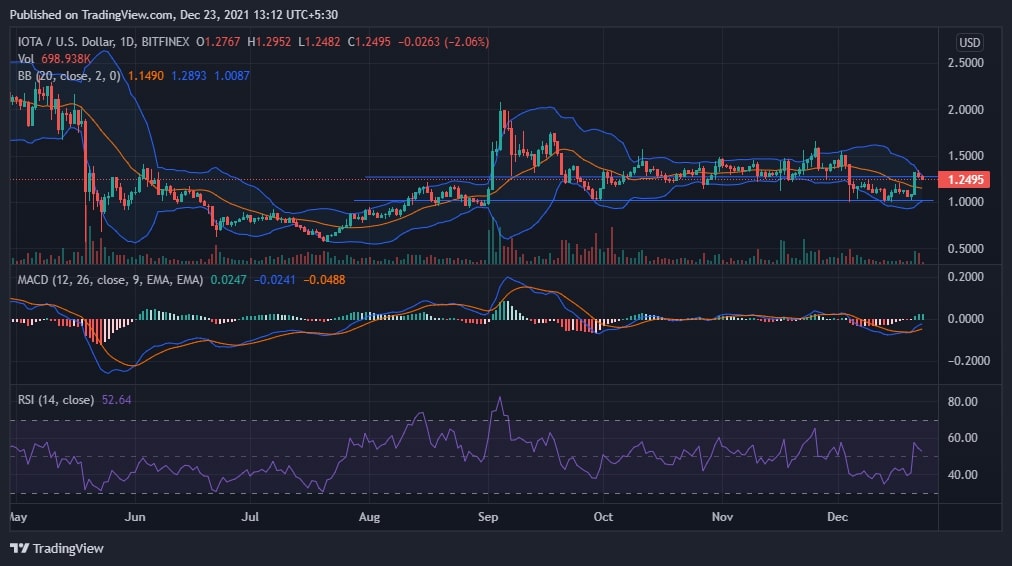 At the time of writing this post, it is trading at $1.25. If you look at the chart closely, you will find three resistance levels, one is $1, the second is $1.26, and the third is stronger resistance around $1.5.

At the very first glance, the chart looks like it is creating a higher support level. Although, if it goes upward, it will face a resistance of around $1.26, which happened in the last two days. Moreover, it has another resistance level of approximately $1.50.

On the daily chart, MACD is bullish, and RSI is over 50, which is suitable for the chart. The Bollinger Band is also bullish; the last candlesticks are on the upper half of the BB. Moving Average is also stable in this chart.

Overall, it is a bullish chart, but keep an eye on the resistance level of $1.5; the chart failed to break it almost five times. If you want to invest, please set a target price of $1.5 and stop-a loss of $0.99; in a hope of getting good returns in the short term.

However, it is on the support level, and it will face a strong resistance level; still, it is the right time to invest in this coin for the long term. If you understand the potential of this coin, then start accumulating from now, and you will get a good return on your investment.

Beyond Blockchain, IoTeX Is Unlocking the $12.6-Trillion Value on the Web3 Internet