As the name suggests, IOTA (MIOTA) was designed for becoming the leader in the market in the arena of transactions between devices on the IoT platform. It is a distributed ledger having a directed acyclic graph (DAG) system. This directed acyclic graph (DAG) system records and implements transactions between machines. IOTA (MIOTA) has been designed by a non-profit organization, which recently tied up with big German firms. Its supported tangle technology gives this coin unlimited scalability, and it also provides every IoT based transactions made on this platform free of cost. 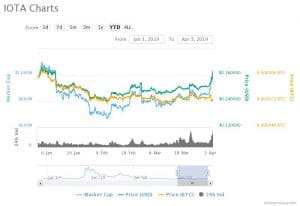 Though the year started on a very high note, by the end of January, the value has shrunk to its lowest of the year. However, past one month has been very crucial for IOTA and during this period the coin has seen inconsistent growth. The market cap on March 03rd was 815,239,406. And the value of each coin was 0.293301 USD and 0.00007608 BTC on March 03rd. The current market cap is 23.42 % more than the value of a month back, and the value of each coin in USD has also increased by an equal 23 %. March has been little tough for IOTA, but there are high expectations from this coin as there are some more developments related to IOTA in the pipeline.

Though the last week has been with uncertainties for IOTA (MIOTA), it has grown well overall. As it hovers around 0.35 USD as of now, there is no doubt that it will soon reach 0.5 USD. But, the good news is for the long term investors as experts have predicted the price of each coin may reach 1 USD by the end of this year. Many new inventions in the IoT (Internet of Things) market will also affect the price graph positively. For short term traders, it is a perfect time to buy with a target of 0.35 – 0.40 USD. As per company a source, IOTA (MIOTA) is soon going to ink major agreements with some major firms and this may further inflate the value of this coin. So, according to some over-ambitious experts, we can quickly make MIOTA price prediction that each coin’s price can also reach 4 USD by 2021.

Verge (XVG) Price Analysis: Is Verge Going To Make Big In The First Quarter Of 2019? 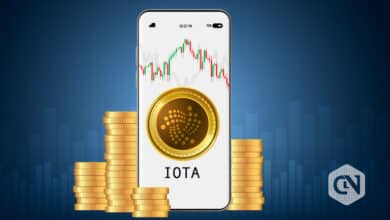