IOTA- Internet of Things Applications is a crypto technology that enables transactions between devices on the internet of things (IoT). Verification of previous transactions lets you perform the current transaction. This type of verification is known as a Directed Acyclic Graph (DAG). Its quantum-proof protocol reportedly brings benefits like ‘zero fees, infinite scalability, fast transactions, and secure data transfer’. 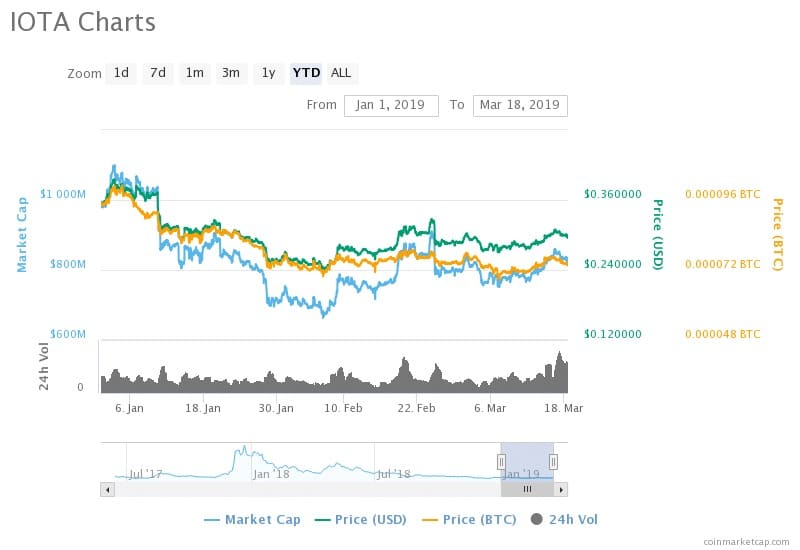 According to the analysis from Coinmarkcap, IOTA is the 14th largest currency in the crypto market with its MCap value trading at USD 822,846,891 for the corresponding 24h volume of $19,692,852 on March 18 at 14:39 UTC. The cryptocurrency’s MCap value crossed 1000 million at the beginning of the year. However, the volatility of the digital currency brought down the values, and the market had been downtrend since then reaching its lowest of USD 674,005,512 on February 06 at 17:34 UTC. This value is 22.08% percent lesser than the current value. The market cap value started to increase gradually and reached a peak value of USD 910,708,058 compensating the loss during the downtrend. The volatile cryptocurrency did not sustain the increase for long, and hence the values started dropping and have reached the current value. The 20-day moving average exhibits an uptrend with values rising from $793,341,365 USD on February 26 to the current value of $822,846,891 USD, a 3.72 percent increase. The bearish pressure on the market considers the percentage difference on the 20-day EMA insignificant.

The analysis from Coinmarketcap also explains in detail about the pricing moments. The price of USD and BTC are $0.296038 and 0.00007352 respectively as on March 18 at 14:39 UTC. While the MCap value and the price of BTC have been overlapping each other, the price of USD has taken a different path with major price variations. The price of USD reached along with its corresponding MCap value $0.327648 on February 24. The trend shows that the price of the USD has seen it’s all-time low on February 06 with a value of $0.242489, which is 22.09% lower than the current value. However, the cryptocurrency reached its milestone, when the corresponding price of USD shot from $0.2748998 on February 18 to $0.327648 on February 24. The percentage rise is estimated to be 19.19% in 6 days. The values of both have been merging and overlapping each other from time to time. The bitcoin reached it’s all-time high and low on January 19 and March 07 with values of 0.0006859 and 0.00008690 respectively. The current price has been the intermediate value with a percentage difference of 18.20% and 7.19% respectively.

The 14-day moving average shows the uptrend in the cryptocurrency’s market. The value inclined from USD 764,192,501 on March 04 at 22:34 to the current value by 7.68 percentile. Both the averages are not in support of the market’s uptrend with negligible percentage increase, the bearish pressure acts upon, pointing the market balance in favor of the sellers. This means both the long term investment and the short term investments will have to be put on hold. The traders will have to explore the market and observe the trend until there is a stable and significant increase. Investing in this cryptocurrency once there is a stable growth will work advantageously to the investors and the cryptocurrency.