IOTA is a German designed network with the next-generation distributed ledger and an associated cryptocurrency known as MIOTA. This virtual currency specifically focuses on the Internet of Things (IoT). It was developed targeting the machine to machine payments and communications. Hence, it provides real-time, secure transactions between machines. It aims at being the dominant g0-to currency for all IoT transactions. IOTA is based on the new technology called Tangle, which is a new data structure based on a Directed Acyclic Graph (DAG). This advanced technology does not have blocks, no chains, and no miners. Without the blockchain architecture, IOTA is built in very different distributed ledger architecture. It achieves by verifying and approving 2 past transactions. 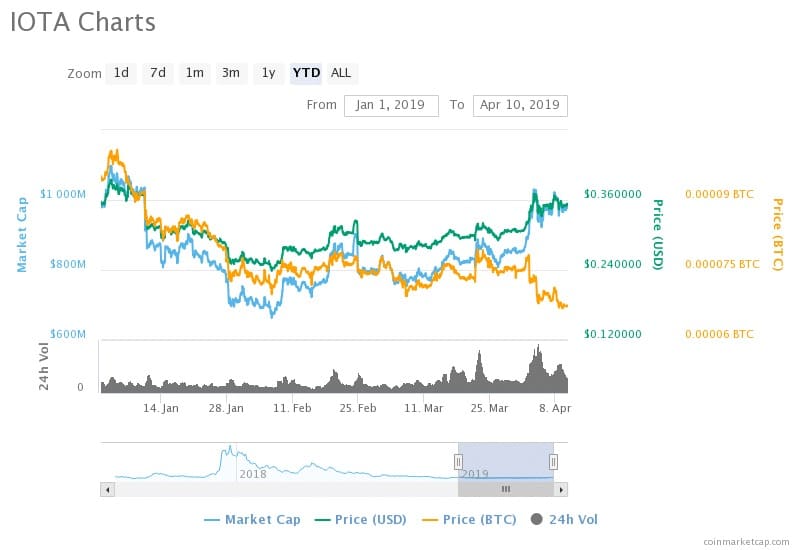 MIOTA coins are being traded at 0.353101 USD on April 10 at 14:54 UTC for its relative MCap trading at USD 981,454,935. Based on these stats, IOTA is the 15th largest currency in the crypto market. This is also evaluated based on the circulating supply of 2,779,530,283 MIOTA coins and its corresponding 24h volume of $12,603,042. Coinmarketcap assesses the approximate return on investment (ROI) for this cryptocurrency to be -44.67%. The negative percentile indicates the deterioration in values from the values during investment.

Overview of the Market Trend

Analysts believe that this cryptocurrency has a solid future despite being disputed by Bitcoin. According to their predictions, the price of MIOTA would reach 5.69 USD by 2020 and further there would be an increase in its price up to 56-560 USD per coin. To Know more about IOTA Price Forecast, just go through this article thoroughly, as here you will get all upcoming price momentum details from an expert’s point of view. By 2025, the coin’s value would raise more than 560 USD per coin. There are also estimations for the growth of the cryptocurrency to reach 0.9115 USD by the end of 2019 and rise further up to 5.1938 USD by 2024.

The current market does not look appealing for the buyers. The stoic values are in support of the sellers. Hence, the investors will have to observe the market trend, as there are predictions for a boom in the price of the coins, which will earn a profitable outcome.