As the name suggests, IOTA (MIOTA) is an open-sourced and decentralized cryptocurrency with a special focus on Internet of Things (IoT) technology. It is running on a directed acyclic graph (DAG) system which helps transactions between machines. It was started as a non-profit organization with an aim to become the market leader of IoT related blockchain technology arena. IOTA (MIOTA)’s design supports tangle technology, and this technology gives unlimited scalability and a cost that is affordable. 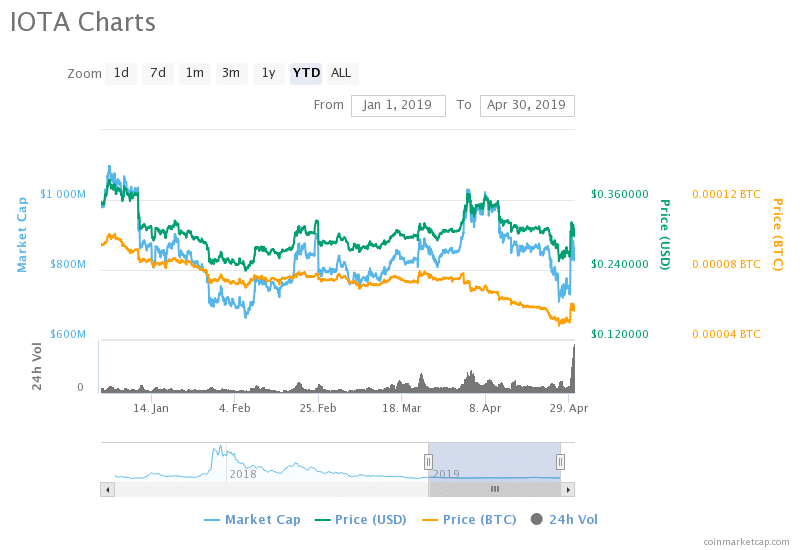 IOTA (MIOTA) started the year with a much positive outlook. It even maintained its stability for a larger part of the year. However, the inconsistency started at the onset of April. On April 03rd, the value was as high as 0.37 USD. But the current inconsistency has devalued the coin hugely, and loss of investors is affecting its market cap as well. The market cap on 30th March was 858,578,462 USD and the value of each coin was 0.308893 USD and 0.00007328 BTC. The current market cap and value in USD is 3.7 % less than the value of 30th March.

The value of each IOTA (MIOTA) coin seems to be struggling. The value has been subject to many price variations. Though the coin has shown enormous growth after the 1st April market boom, it could not sustain the momentum for more than 7 days. We predict the coin to rise again. The next resistance should be at 0.34 USD. From there it may fall for a while only to rise again. By the end of 2019, the value should go past 5 USD. Moreover, as per MIOTA price prediction, 2020 goes with 20 USD. This enormous optimism is because of the current Jaguar Land Rover deal with IOTA and other potential deals in the pipeline.

We advise the short term investors to make a purchase now. The value is likely to move up. The long term investors will be at the best place if they make the investment long-standing and without panicking at the steep momentary downs. The scheduled changes in the company can give them a high profit of 100% by the end of 2019.