Even the first three letters of IOTA indicate the most utilized technology of the 21st century, the IoT or the Internet of Things. Even somebody who is unaware of this token would easily be able to associate its relevance with IoT technology.

Launched in 2017 with a super returning ICO, IOTA took the markets by storm during the first crypto bull run back in 2018. But after a gap of four years, IOTA has again been dominating the news section on cryptocurrencies all of a sudden.

No, there hasn’t been any news of partnership or collaboration, but it’s a certification. This blockchain is attempting to render itself as an ISO 20022 coin, which would place it amongst the group of elite few such as XRP, XDC, Quant, and others. IOTA is a feeless distributed ledger that sounds similar to the XRPL that is utilized as a highly modified Proof of Work consensus mechanism called Fast Probabilistic Consensus.

IOTA (MIOTA) splits a transition across every single node on the blockchain, allowing less time to complete the transaction. Nodes need to confirm two transactions to showcase their active status, and using its methodologies has been fast and pretty effective. IOTA now ranks 69th with a value of $461.2 million as of December 20, 2022.

IOTA (MIOTA) reaches a new low with each passing month. The trend for this token has been retesting support and breakdown. Despite attempts to add new methodologies to incite its higher adoption, the cryptocurrency is moving towards failure if no immediate movement is revolved. Can MIOTA survive the tough market conditions? Read our IOTA predictions to know! 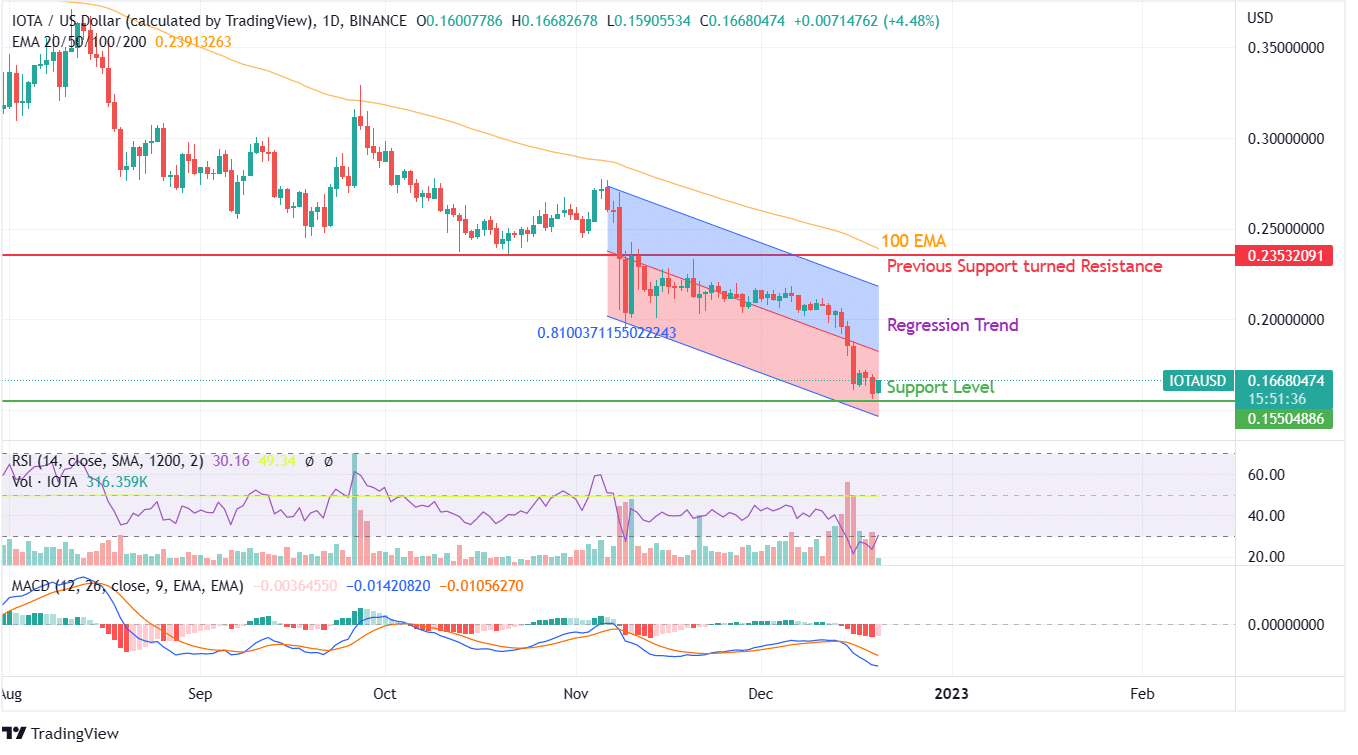 IOTA cryptocurrency reached a new low of $0.15 in December 2022, which seems very negative for IOTA holders. The parting gift of 2022 could have been more positive had the token shown more enthusiasm near its resistance levels.

The price movement has been trading in the red zone on a regression trend. Showing no hopes of retracement, MIOTA is expected to reach new highs in the coming days. The news of its ISO 20022 adoption is creating a new rally amongst buyers, and there can be a positive rally even if it’s unsustainable.

On a daily candlestick pattern, MIOTA has breached over significant value in the last one and a half months. The MACD indicator for the IOTA token is gradually moving towards new dips, while buyers would be expecting a positive turnaround. Those not averaging their holdings should stay clear of this token till the time it manages to retake $0.25 in the short term.