Bitcoin (BTC) in the crypto market, Game of Thrones (GOT) in television series and Avengers End Game in the sequel of Marvel Cinematic Universe are gaining billions of clicks and hits in recent time. With Bitcoin investments hammering in the mind of the devoted investors, it becomes paramount to emphasize the reason behind this fidelity.

Although, it is none other than the growing hike of Bitcoin price in the last 24 hours that will eventually let its investors celebrate this Bull Run as per Bitcoin future value predictions. 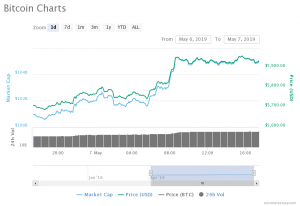 As per the chart by Coinmarketcap on 7th May at 11:16 UTC time, the featured statistics of the greatest hike, in a while now that has to lead the prices to almost touching $6000 mark are as follows:

Just as the hype created for the Avengers Endgame, it is still evident after 10 days of the movie release; how can the same not be shown by the Bitcoin investors whose investments have been jewels to the crown of the market. Not only for the one who decides to get a long position but also for the one who goes short, will earn bountifully.

Qtum (QTUM) Makes It To The Big League; Partners With Google Cloud