Bitcoin saw a monumental rise in the early 2010s, which, as we now know, resulted in a burst bubble by the latter half of 2017. Since then, coupled with its slow rate of adoption and continual price fluctuations, analysts have started speculating that the cryptocurrency may well be stuck in a downward trend.

This article will take a look at some recent data on the volatility of the price of Bitcoin in a bid to get a better sense of where it may be headed, as well as to answer as to whether it is, in fact, facing a downward spiral moving into the new decade.

A Recognized Measure of Market Volatility

Realized volatility, or short-term historical volatility, refers to a two-week measure of which factors about the data have already occurred. This type of volatility can be useful in predicting behavior, especially when comparing year-on-year data. This measure is relevant when looking at the price performance of cryptocurrencies as a whole, which are known to be relatively volatile in the short-term.

The Bitcoin Trend: Is a Downtrend Dominating?

Recent data has provided a great deal of insight into how the price of Bitcoin wrapped up the last decade, as well as offering a glimpse of how it may perform as the new year gets going.

Factors suggesting a Bitcoin downtrend include sell-offs of cryptocurrencies as a whole, a drop in market dominance percentage, as well as increased short-term price action. 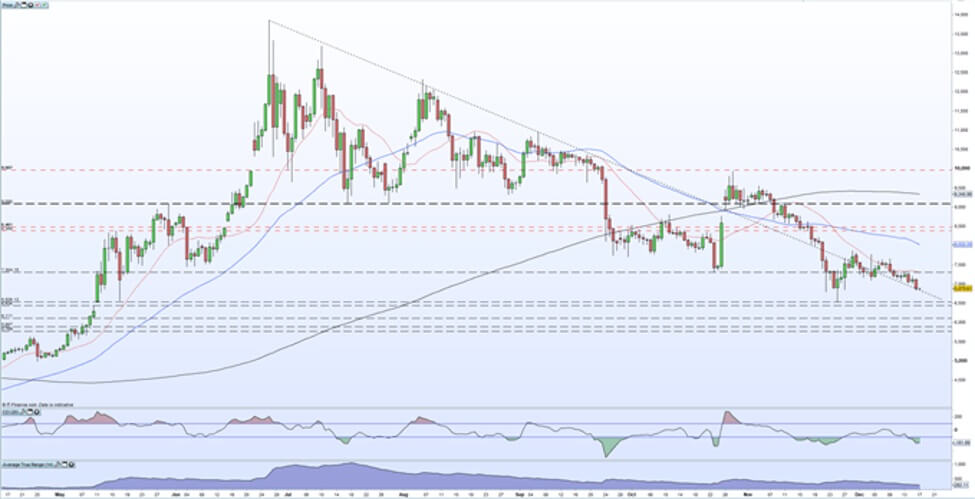 The second half of December 2019 saw a wide sell-off across the cryptocurrency space, which offset any short-term gains that may have been accumulated in the last quarter of the year.

Reasons for the sell-off are still being speculated, leaving analysts wondering whether buyers may retreat over a longer period this time as they wait for the market to return to equilibrium before buying again.

While Bitcoin continues to hold the largest share of the crypto space as a whole, it has fallen from mid-September 2019 high of 70% to 67.2% at the end of the year. Bitcoin last saw this kind of market share in March of 2017.

A downward price trend for Bitcoin, which started from the mid-July 2019 high, remains in effect. This continues to act as a catalyst for price action. Negative market sentiment has led to steady declines, with predictions that it may fall below the multi-month low from 25 November in the next few months.

Read more to know about BTC price forecast, it may fall to as low as $5,769 as a result of further sell-offs. Some indicators suggest that the market is currently oversold, which is driving sentiment that further sell-offs will continue into 2020.

While last year was a difficult year for Bitcoin and other cryptocurrencies, there are some analysts presenting more optimistic arguments, effectively considering the volatility to be part of a “teething process” for disruptive technology. Bitcoin did start 2020 with a very slight upsurge, but that it didn’t last long enough for anyone to start writing home about it. Many of the crypto influencers and supporters predicted that Bitcoin will surge in nearer the future. If it is true then this time is best to buy Bitcoin to earn good profit. Choose the best among the available crypto trading software in the market to make a profit.

Will Bitcoin recover once the market returns to equilibrium, or is it destined to decline over the course of this year? Popular belief suggests the latter, but only time will tell.