Nexus (NXS) cryptocurrency was getting traded in the market at a higher rate. It was up by 2.7% against the US dollar during the period of one day which ended at 20:00 PM ET on 19th February. One Nexus crypto unit is available at the price of $0.32 or 0.00008061 BTC, at present. The crypto is available for tradings on various known cryptocurrency exchanges such as Trade By Trade, Bittrex, and Binance, among a few others. 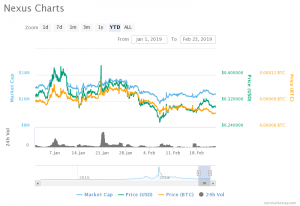 In the last one week, Nexus has been traded at the rate of 3.5% up against the US dollar. Nexus holds the market capitalization of $19.00 million and around $138,070.00 worth of Nexus had been traded on multiple crypto exchanges in the last one day. It is Proof- of -work and Proof-of-stake type of crypto that runs on the SHA3 hashing algorithm. It first came into the market for trading in on June 2014. At present, its total supply is 59,907,495 coins, and out of this, the circulating supply goes to 59,707,886 coins.

Nexus (NXS) is available on the following exchanges for buying purposes A9 apart from those mentioned above): Cryptopia, Upbit. Investors and traders are not allowed to purchase cryptocurrencies like Nexus directly by paying in U.S. dollars. They will have to acquire Ethereum or Bitcoin first. They can use these Ethereum or Bitcoin to buy Nexus. They can do it on one of the exchanges from the list mentioned above.

Nexus is a P2P blockchain powered network that has enhanced scalability, speed, security, and accessibility. Nexus makes this happen by using a quantum-resistant 3D blockchain and integrating this with a satellite space.

Once a person posses the NXS token, he/she will need an NXS wallet to store these tokens safely. Nexus has an in-house wallet which is supported by operating systems like Mac, Windows, and Linux too. It is better that these token holders store their NXS tokens in the in-house wallet of Nexus because they are allowed to stake these coins only when they are stored in a Nexus wallet.