On-chain liquidity protocol Kyber Network tweeted on Tuesday that its Federal Price Reserves (FPR) is uniquely designed to allow market makers and advanced developers to generate profits on-chain. In a Medium post on the topic, Kyber stated that FPRs make the market making profitable and feasible for a wide range of tokens.

The network further added that market makers that use FPRs provide about 70-80% of the liquidity to the blockchain trades on Kyber. The advantages of these FPRs included high capital/gas efficiency, instant exposure to a wider set of takers in DeFi, precise control over pricing strategies and risk exposure, and several safety mechanisms.

In a subsequent tweet in the Twitter thread, the network claimed that Kyber is the most used and integrated protocol for decentralized finance market makers. An infographic shared in the tweet showed that its FPRs are used by a large number of DeFi applications, traders, and end-users. Some of the big names integrating Kyber Network’s FPRs include Coinbase, Opera, ChainFuel, Coinplan, Torque, InstaDapp, etc.

5/ Market makers require a robust pool of takers to absorb the liquidity they provide. Kyber is the most used and integrated protocol in #DeFi ?Market makers who set up FPRs immediately get the widest access to the DeFi applications, traders, and end users in the space. pic.twitter.com/k8xxKrtTWK

7/ Kyber has joined the Chicago DeFi Alliance to better understand the needs of professional market makers and work with other projects to drive the DeFi space forward? If you're keen to set up an FPR, find us on discord! https://t.co/GATUjxaPzt
Read: https://t.co/DinTR9Jcfj pic.twitter.com/gsKyl3qmIZ 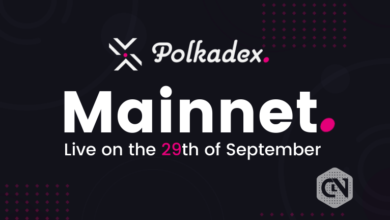 Polkadex Mainnet to Be Launched on September 29, 2021