Litecoin (LTC), at the time of penning down this analysis, was seen trading at $49.55 after rising briefly around $50 in the wee hours of the trading session today. However, it was just yesterday when the major cryptocurrency by market capitalization—Bitcoin was seen breaching a 5-week resistance against the US Dollar after a notable downside correction.

Back then, when crypto was only known by Bitcoin, investors started knowing Ethereum, XRP, and Litecoin as the gainful investments just like Bitcoin. In this regard, it was Litecoin that followed Bitcoin’s qualities and is believed to be one of the major investments for the long-term. Therefore, LTC has often been seen following the price trend and patter of Bitcoin, and with this today, the price dynamics of Litecoin are following the positive market sentiment. Therefore, just go over LTC Coin Price Prediction to better understand the future price prediction to enhance your knowledge about the same.

Ask yourself WHY is @Grayscale buying #LTC hand over fist?

Just as LTC is believed to be the long-term investment, the LTC daily active addresses have amplified over time.

$LTC daily active addresses are continuing to grow on a long-term time scale. And with a current ~$48 price point at a fraction of where it was just six weeks ago ~$68, the ongoing bullish divergence for #Litecoin is showing glimpses of coming to fruition. https://t.co/IrJZYWO2tP pic.twitter.com/0H2He4DNQ9

On the intraday chart, Litecoin price is seen pulling back slightly after hitting the major resistance at $50, while currently trades at $49.55. It was in the early trading hours when LTC/USD was breaching the upper band and continue to hold support from MA50 & MA200 at $47 & $46, respectively. However, as the Bollinger Bands widen, we expect a volatile movement in the near-term, which is nothing but the entire market sentiment, at present.

In this regard, the MACD indicator also confirms the complete bullish divergence as LTC price crosses the major resistance at $50. The RSI of Litecoin is also inclined towards the overbought region and lies at 68.09 with amplified gain in momentum of the coin against the US Dollar. 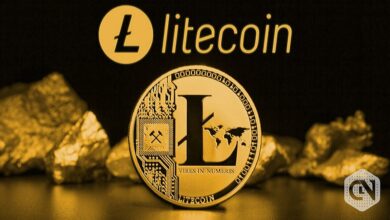