Recently, Litecoin has reached a new milestone with a partnership with VISA. The founder of LTC introduced the ‘Litecoin Card.’ It is useful for instant off-ramp payments, which will convert into Litecoin holdings on the receiver’s end. Litecoin published this news on their Twitter page.

They also developed a partnership with a Fintech firm to enable users to make real-time payments with Litecoin. Now you can simply put the card and purchase products/services with LTC. The features and functions are almost the same, like a VISA credit or debit card. Indeed, it increases the utility and fundamental value of LTC. Moreover, AMC Theatres also announced that they would accept the LTC as a form of their payments.

In 2011, Charlie Lee developed Litecoin to prepare a better version of Bitcoin. It is a faster version than BItcoin and has reached a market cap of $17 billion. The Litecoin Foundation recently celebrated its 10th anniversary. They also achieved milestones like low transaction fees and 100% network uptime.

Earlier this year, LTC also completed the code of MWEB, which is a network upgrade. It improves transaction privacy and allows fast transactions.

They also introduced OmniLite to dive into the NFTs (non-fungible tokens). However, in September, the price of Litecoin hiked 34% on the news that LTC payment will be accepted in Walmart. Later the PR team branded it as fake news, and the price was retracted. 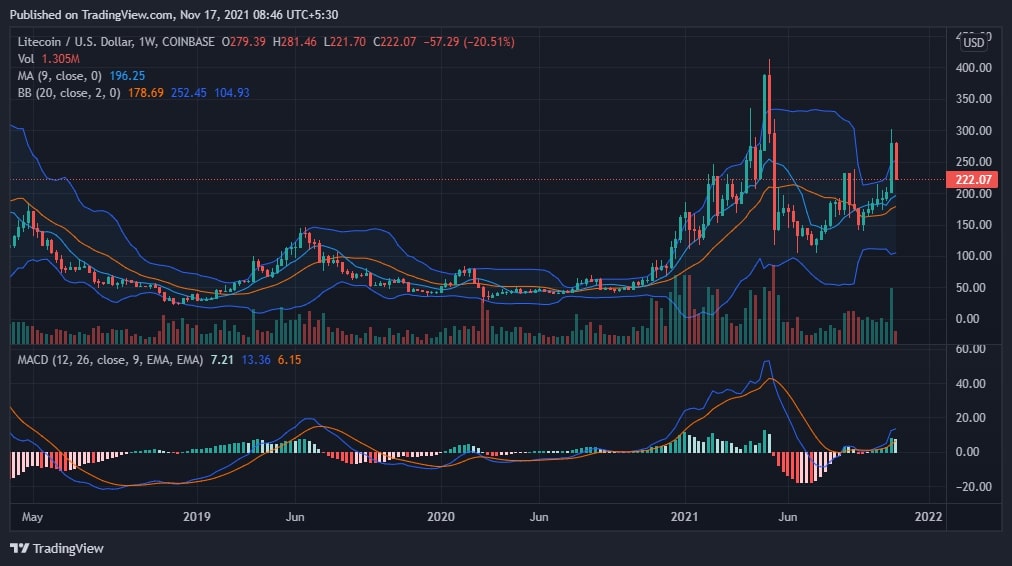 The MACD chart is bullish, the blue line is far above the red line, and the bullish run will continue till $380. Indeed, we will observe some retractation in the journey towards $400 and above.

RSI is stable at around 54. The Bollinger Band also supports neutral momentum, and the last few candlesticks are on the upper half of BB and above the baseline. Moving Average is also following the trend. 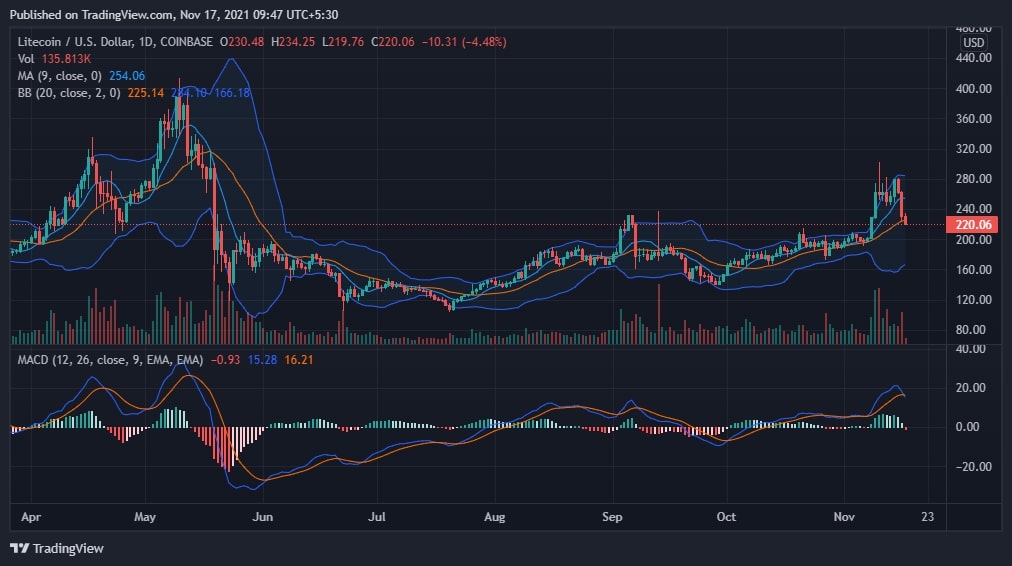 On the daily chart, MACD is on the verge of bearish crossover. Moreover, the price chart is bearish due to the three red candlesticks. Litecoin’s price may slip down further in the next couple of days until it makes new support levels around $200.

Though the Bollinger Band is neutral, the RSI is considerably strong and reflects a bullish trend. Moving Average and Ichimoku Cloud is neutral as well. For new investors, it is tough to decide the actual price of investing in LTC.

Due to the price fall of BTC, the crypto market is down. However, Litecoin can be down in the short term, but it is on a bullish run.

According to our Litecoin forecast, if you want to invest now, then you should watch the price closely. You can invest it for long-term purposes because Litecoin is a faster-growing coin, and it will give you a good return in the long run.

However, if you want a short-term gain, it is not the right time to invest. You should wait for a few weeks until it reaches a support level.