If you are a crypto enthusiast, you might know the fact that Litecoin had a moderate run in the previous year. However, things are seeming bright for this alternative coin in 2019 as the digital currency experiences a price surge by almost twofold in just three months.

Litecoin, which was introduced in October 2011, is an early spinoff or alternative coin of bitcoin that showed great proofs and fundamentals. But since quite some time, the altcoin had been registering a fall in both its value as well as market standings, notably during 2018. But the start of 2019 has managed to bring positive changes for Litecoin. If we compare the crypto’s value from early 2019, its price has significantly increased, with almost over 84%. The credit goes to the Foundation’s consistent efforts and great business decisions along with the enhanced market scenario as a bear market is starting to decelerate.

Towards late 2017, Litecoin had begun to witness a huge fall which was contrary to its usual high position in the digital asset market. While the majority of crypto coins registered a drop anywhere between 70% – 90% through the bear market of 2018, it was Litecoin that suffered the great fall. 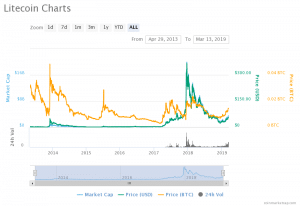 December of 2017 had witnessed Litecoin reaching the value of over $375 at its peak, but the market soon changed the dynamics and brought the digital currency down to $25 in late 2018. It reported a loss of over 90% in its value. With its dramatic fall, analysts stated that the cryptocurrency might have turned out to be oversold.

This, the dramatic decrease can also set the required fuel for notable gains, believe experts. When the price of an asset falls hard, often the rebound is higher, and it seems to have happened with Litecoin as well, states Satoshi Capital’s chief officer of investment, Josiah Hernandez.

In recent times, Litecoin has seen some positive developments including Lightning Network’s increased popularity and acceptance. That’s because people have realized the requirement for frictionless and swift transactions, both of which is offered by Litecoin.

Furthermore, many countries that have been actively looking for an alternative to cryptocurrency have considered Litecoin to be a great option, for example, Venezuela. The Foundation is also going to release Litecoin Core 0.17 that will reduce the coin utilization fees further. Crypto community also feels their hope that this supposed ongoing harsh market season is gradually moving towards an end might also be one of the many reasons for this price surge.

Based on Litecoin forecast, Litecoin is believed to be garnering positive effects in the market with a strong core foundation in the near future.

After Bearish Trend, Analysts Are Now Hoping A Bounce in The Bitcoin