Litecoin (LTC) is a Bitcoin protocol based cryptocurrency created by Charlie Lee. However, unlike Bitcoin, it uses a hashing algorithm. The main focus of Litecoin is its peer-to-peer transaction. Moreover, Litecoin (LTC) uses the memory intensive Scrypt proof-of-work mining algorithm. The Scrypt algorithm allows consumer-centric hardware such as GPU to mine LTC coins. 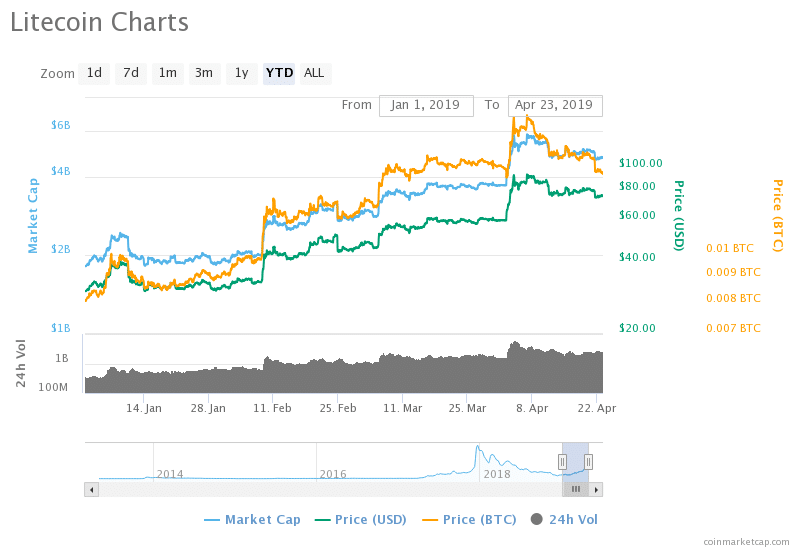 Let’s analyze the historical change in the value of Litecoin (LTC):

Over the past two months, Litecoin (LTC) has put up a pretty amazing show. At the time when experts are predicting for a bearish trend in the crypto market, Litecoin price has been posting steady gains with a surge of almost 300 percent so far in this year only. And currently, Litecoin (LTC) is one of the best cryptocurrencies to invest in 2019. According to Litecoin Price Prediction, and looking at the developments in Litecoin, and adding the positive news in favor of the crypto, Litecoin (LTC) might hit the $100 level before the end of this year. This year, till now, the coin has made several attempts towards that level but failed.

Just a few days back, Litecoin (LTC) attempted to break the resistance level of 85 USD. Nevertheless, the rally was not strong enough to provide all the support it needed. Soon the price of Litecoin (LTC) declined and fell towards the $74 support area. The downward trend continued, and price finally plunged below the $75 support zone. But since then, Litecoin price has recovered gradually and is now trading around the $76 level. Additionally, there is an immediate support $74 level. If the current bullish trend follows in the coming days, the crypto may see fresh support $80 level. Then the next hurdle would be $85 resistance level. Any further beak over this level will pave the way for more gains and Litecoin (LTC)’s price prediction for the end of 2019 will likely be attained in the coming month.