LTC is a decentralized cryptocurrency and it posses the same encryption techniques for transferring and creating funds in order to confirm transactions. Litecoin was developed by former Google engineer, Charles Lee in October 2011. The transaction rates of LTC is much faster than BTC. Litecoin’s algorithm allows a total of 84 million Litecoins to be created. This is four times greater than the supply of BTC. 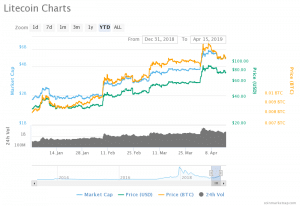 Currently, BTC is facing numerous complaints due to its higher transaction fees and very slow networks. It is not much faster today. This has actually benefitted LTC as due to no scalability issues, it’s much faster than BTC. Even, more merchants are now starting to shift their choice to LTC from BTC due to its efficient network. Thus, it is becoming more usable with a significant increase in the number of its users. Moreover, it has very fewer transaction fees, compared to BTC. Analysts assume that with synchronization with blocknet, LTC will be more popular and its adoption rate will be remarkably higher. Its market capitalization is also set to increase accordingly. Many crypto enthusiasts are of the opinion that LTC can spark up to $500-$600. LTC is much more promising than other altcoins and we think that LTC can trade around $200 by 2019 end.

As per latest Litecoin Prediction, LTC has much potential than other altcoins. It is all set to give a tough tier to the leading BTC due to its faster network and cheaper transactions. It is reaching to more number of people day by day so, all these can raise its value to a very significant level in the upcoming days.

Cardano (ADA) Price Predictions: Cardano’s Fall is Temporary; the Target Should be 0.1 USD

Verge (XVG) Price Analysis: Will XVG be Able to Get Out From Resistance Triangle?