Litecoin or LTC is one of the great alternative cryptocurrencies among all altcoins. It is based on the same source code as Bitcoin but has got some minor alternations. The idea to invent this light coin was to create crypto that can be the easily spendable version of BTC for low-value transactions. It is a peer to peer cryptocurrency with open source software project released under the MIT/X11 license. The value of LTC will grow largely this year due to its fair launch process.

Price analysis of LTC on the basis of Litecoin charts 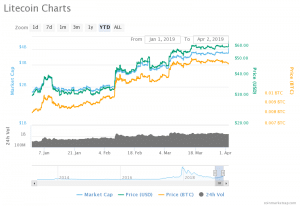 If the market capitalization of the global fiat currencies become approximately $5 Trillion and the Gold market is approx. $7 Trillion, then, LTC can trade around $3500 by 2019 end. It seems feasible though, as LTC can attain 2.5% of this asset pool, which is equal to a market cap of approx. $0.3 Trillion. If this can be the case then, LTC can at ease touch $3500 mark this year. This calculation has some certain conditions which are to be fulfilled and these are discussed above. But, as this is tough to happen right now, we have to think optimistically. According to Oracle times, as LTC has major advantages over BTC, it can reach to $1000 by 2019 end. According to Finder, LTC can be around $40 by 2019 end. George Tung, a crypto enthusiast has said that LTC can be as high as $1500 by the end of 2019.

The adoption rate of LTC has greatly increased as very recently, LTC logo was advertised on the mat of UFC. UFC bitcoin betting is a famous fight that grabs global eyeballs. Even, a shopping center in Singapore has launched an ATM that accepts both LTC and BTC. We expect that LTC can take a high sharp steep by August this year as the block rewards to the miners is expected to drop by almost 50%. This will automatically increase the demand and value of LTC and it can be around $250 then. Read more and get more information about LTC price prediction, live price and news updates by experts.

LTC is doing incredibly good recently. Many global supermarkets have started accepting LTC which is indicating its increasing demands. Moreover, the coin price will be fairly high in the upcoming days and thus, it can be a great investment today.