Litecoin (LTC) is based on the Bitcoin protocol created by Charlie Lee. It is a peer –to – peer cryptocurrency. It differs from Bitcoin in the way of the hashing algorithm used. Unlike Bitcoin’s 10 minutes processing time, Litecoin processes every block in an interval of 2.5 minutes. Litecoin claims of using scrypt in its proof-of-work algorithm. This scrypt facilitates consumer-grade hardware for mining coins. This algorithm is considered as a sequential memory-hard function which requires asymptotically more memory than a non-memory hard algorithm. 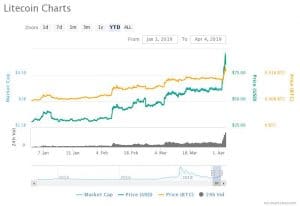 Litecoin (LTC) has been growing gradually over the past month. The market cap recorded on 4th March was 2,945,977,239 USD. The value of each coin with respect to USD and BTC stood at 48.52 USD and 0.01260083 BTC respectively. The current market cap is 80.56 % more than the value of one month back. And the price of each coin in USD is 79.18 % more than the price of one month ago. However, the month’s growth rate is increasing day by day with no sign of bearish movement. The growth rate was plateaued from March 18 to the first day of April only to get a huge momentum of 2nd April.

As mentioned earlier, the coin started the year 2019 with a price as low as 30 USD. But, this year has given Litecoin tremendous growth. With some lows, the coin has reached as high as 86 USD. The last week was very crucial for Litecoin’s growth story. Just before seven days, the coin’s value was hovering around 60 USD – 61 USD. The next target for the investors should be 100 USD. And it seems like there is no sign of a bear in the way. So, as per Litecoin Predictions, the path of Litecoin towards 100 USD would be free from any abrupt fall, even if fall happens, it would be minimal and for a shorter span. The long-term investors should be ready for getting huge profits out of their stands made at lower rates. The coin’s performance is on consonance with major coins in paying around 100 % profits over just a quarter.