Litecoin (LTC) was created by Charlie Lee on Bitcoin’s protocol. It is one of the major peer–to–peer cryptocurrencies. It differentiates itself from others as it uses a hashing algorithm. Unlike 10 minute processing time of Bitcoin, Litecoin (LTC) uses mere 2.5 minutes for processing one transaction. It also uses scrypt in its proof-of-work algorithm. This algorithm is known as a sequential memory-hard function as it requires more memory as compared to other conventional algorithms. 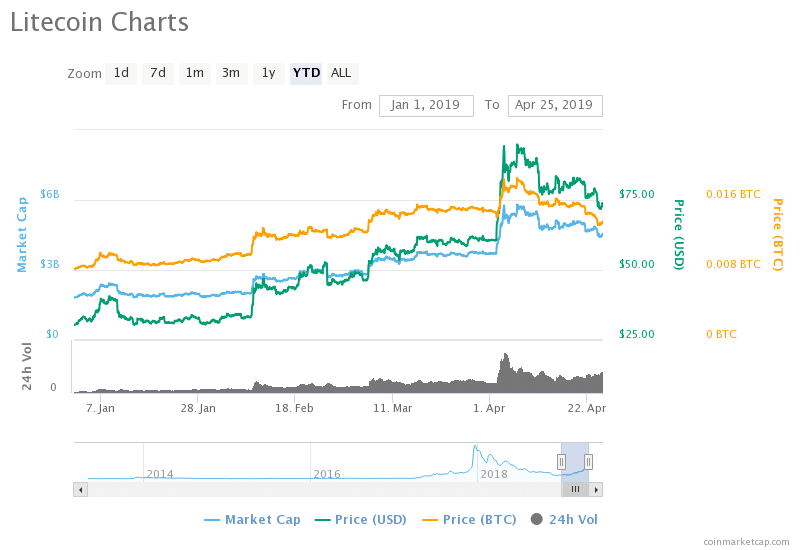 Along with the BTC’s mark, the coin has started the year with a relatively lower price and managed to sustain growth since then. Some variations could be seen in the last week of February. However, the coin managed to revive from that stage and grew swiftly again. The market cap as on 25th March was 3,680,330,512 USD. The value of each coin was 60.30 USD and 0.01500607 BTC. The current market cap is 22.05 % more than the market cap of 25th March. And the value of each coin in USD has also inflated by 21.16 % in these 30 days.

Litecoin (LTC) is one of the few crypto coins in the market which have fared really well this year. It has been showing growing signs from the starting of the year. The recent April 1st Boom also pushed the coin too much higher heights of 93 USD. Right now the coin is going through Price correction. But the value should grow constant at 75 USD to 80 USD level. The next resistance should be there at 95 USD which may happen by the end of this quarter. In accordance with LTC Forecast, the long-term outlook seem absolute bullish. As the pricing of Litecoin (LTC) is heavily dependent on Bitcoin (BTC), the value will reach as high as 500 USD by the end of 2019. By the end of 2020, the value may be at 3000 USD.

We advise the short term traders to keep their patience level very high in order to gain huge in 15 days. The long term and medium term holders will be profited by huge if they stick to their investments without panicking much.