Litecoin has not only failed to create a breakout but also moved further toward the abyss. Litecoin is popular not just for its payments ecosystem but as the second pure cryptocurrency to exist in its original state after BTC. This is a huge revelation that a cryptocurrency can survive the onslaught of development and improvement if there is enough stamina in its offered service.

LTC has the largest merchant network that counts above 2000. The latest interactions of fixes and code upgrades have improved the privacy and usability of LTC tokens. Litecoin ranks 21st in terms of market capitalization and currently holds a net worth of $3,854,861,406. LTC hit an all-time high of $412.96 in May 2021 and again a high value above $300 in November 2021.

The price action of Litecoin showcases a positive trend on the weekly outlook, but on monthly charts, the outlook again shifts to negative action. Buyers need to become more aware of the development of the latest resistance level and attempt to steer clear of such levels to reduce the probability of volatility in their holding portfolio.

LTC price action has once again been trapped in a consolidation zone, where buyers and sellers are both hyperactive in their zones. Technical indicators have been sound and proactive, and the current outlook has changed drastically owing to the double-digit decline of September 6, 2022. What does the future look like for Litecoin? Read our LTC prediction to know! 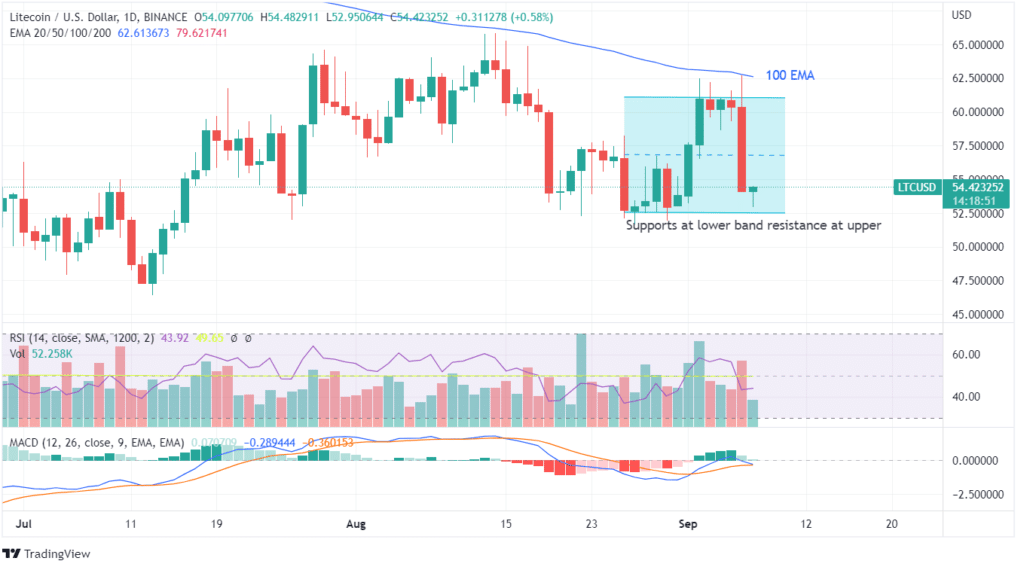 Tracking the price action, we are witnessing growing anxiety over the buyer’s capability to control the momentum near the 100 EMA curve of LTC. $52 has become a buying zone, while $61 has turned into a selling level. Between these two levels, there is a decent difference.

The huge profit booking witnessed during the last hours turned the tables for LTC enthusiasts in the short term. Short-term holders already made a decent benefit just by scalping their positions and making a re-entry at $52.

Technical indications displayed by RSI show a below-neutral level that emphasizes on creation of a profit booking, while the MACD indicator has shaken hands with RSI to mark a bearish crossover. But given the fact that a simultaneous buying activity is seen today, the chances of creation of a bullish crossover have just increased.

For a longer duration, Litecoin candlestick patterns show buying momentum of the previous week has already been tied by the selling sentiment of just three days. This superimposes a higher profit booking probability in the coming days.

Once again, the prices of LTC need to have support from the $50 range, or a positive candle can emerge only after a higher breakout pattern in the next four days of this week. The last negative candle showcases positive action, rejection, followed by withdrawal of buyers, which created a panic selling sentiment for LTC.