London Metals Exchange is the futures exchange with the world’s largest market for metal derivatives. Hong Kong Exchanges and Clearing owns LME since 2012, following voting done by shareholders of LME in order to sanction the sale of exchange in £1.4 billion. United Kingdom-based global metals exchange is reported to back the idea of tracking physical metals with the help of blockchain technology. As per a report published by Financial Times (FT) on Tuesday, the unnamed sources confirmed the news. 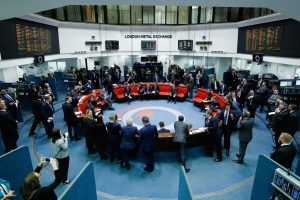 LME is supporting consortium initiative led by Swiss metals giant “Mercuria” which is a commodity trading firm. The team at Mercuria is developing a blockchain-based system also dubbed as Forcefield, as an effort to track the trade of copper, zinc, aluminum, and similar physical metals. The report underlined that banks like Macquarie and ING had extended their support to this initiative. Forcefield will aid the buyers to track the source of their metal and will also assist them in proving the ownership of their metal inventory.

The effort would enable industrial consumers to track the source of their metal better and also give metals traders secure ownership of their inventory.

Whereas, Chief Executive Matt Chamberlain refused any involvement of the firm with any such initiative. He also explained Financial Times that:

He further noted that it would be “a huge win for the metals trading community,” if the whole ecosphere of metal trade will work closely in order to develop such platforms. As per the information present on the company’s official website, the exchange has sanctioned almost 500 warehouses in more than 34 geographies across the globe to store metals on behalf of its holders.

On the other hand, FT noted that China is the largest consumer of metals across the globe still the warehouses in the nation are yet not approved. LME launched LMEshield in the year 2016. LMWshield was an electronic system used for material storage in China, but it was not much successful.

Blythe Masters, a well-known Wall Street blockchain figure acclaimed the virtues of the technology in supply chains in October 2018. He agreed that the present form of supply chains could help to streamline and simplify the process.

Ethereum (ETH) Price Analysis : Ethereum to Triple Up in this Year