With the recognition of the concept of cryptocurrency, many people are now looking to invest in some prominent digital coins other than Bitcoin and Ethereum. As Bitcoin is called as the digital gold, LTC is referred to as digital silver, and it has caused a considerable stir among the crypto communities with its inception. It is an excellent alternative to BTC and ETH. Charlie Lee, an ex-Google employee, had invented this coin as a lighter version of BTC. LTC allows faster and cheaper transactions than BTC. 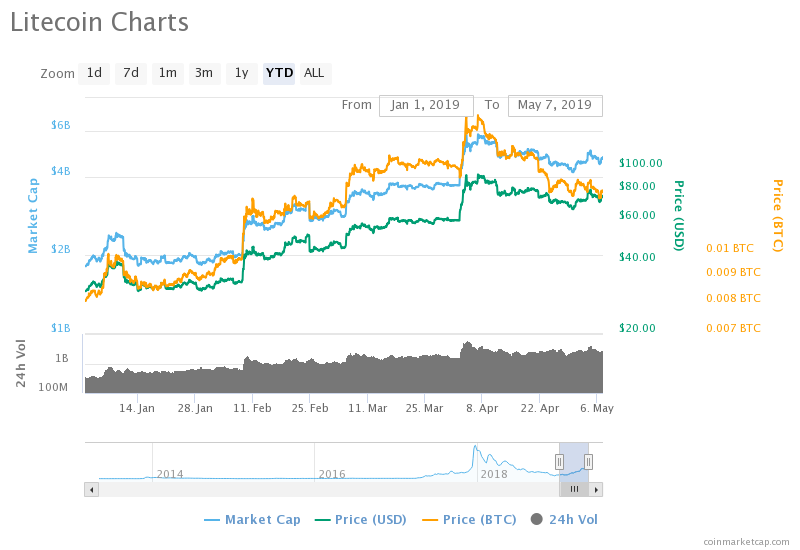 The above Litecoin price chart shows the following information-

The same chart also makes it evident that approx. One month earlier, LTC had a trading value of 88.04 USD

So, within this approx. One month, the Litecoin value has been decreased by -12.02%

Litecoin Price Prediction by the end of 2019

LTC had been running on a bearish trend for a long time, and it’s been some days when it has started making progress towards a bull trend. Apart from this, it is also noted in NewsBtc that the Litecoin mining hash rate has been upraised steadily over the past three months. This indicated that more miners are gaining attention to LTC’s network as they have the conviction that LTC can have a persistent bull trend in its upcoming future. Moreover, LTC’s network represents the confidence of a typical digital asset due to its high-security level. As LTC started gaining momentum, analysts opined that LTC was recovering faster than Litecoin halving, which is quite common with cryptocurrencies.

According to the latest update by its founder, fungibility and privacy are the main issues which are hindering LTC’s full performance so, he and its developers will be focusing on these so that users can have a more confidential transaction on LTC’s blockchain network. According to a major crypto analyst, the price of Litecoin can be as high as $650 this month. Now, this is quite unrealistic as the crypto market is still very volatile. To be optimistic, as per our Litecoin Predictions, the LTC price to be around $250 by the end of 2019.

LTC will be coming with a more advanced version as its founder has already stated the same. It is steadily gaining values, but as the crypto market is highly volatile, fluctuations in prices are inevitable. Other than that, LTC promises crypto, and by the end of this year, volatility will be reduced, so, its worth to invest in LTC.

Neo's Strong Fundamentals will Push the Value for a Price Rally

Litecoin Struggles to Hold on to $200; Profit Booking Continues