Cardano- whose cryptocurrency is denoted by ADA, is an advanced and efficient combination of Bitcoin and Ethereum. Bitcoin is financial based blockchain, and Ethereum is a smart contract based blockchain technology. Cardano is a step ahead and facilitates both the platforms in a better way. In simple terms, Cardano is a cryptocurrency that is decentralized, blockchain based system, powered by the ADA coin and it runs on the Cardano platform. It is also a smart contract-based system and is used to control Decentralized Apps also known as DApps. However, Cardano is a two-layered system – one layer manages the DA exchange, and the other layer runs the smart contracts. It is also the first peer-to-peer transaction system based on scientifically tested theories.

The main objective of this cryptocurrency to create a sustainable ecosystem using the separated layers to manage the transaction of ADA coin and smart contracts separately. Its primary motive is to provide quick and safe currency exchange and to let the users operate diverse, smart contracts and applications seamlessly. The smart contracts provided by Cardona are more secure when compared to the other cryptocurrencies. Since the platform is layered, it becomes difficult to tamper it once entered. And, once the information is stored, the contract executed or the transaction is performed, the data are stored in the blockchain ledger permanently. 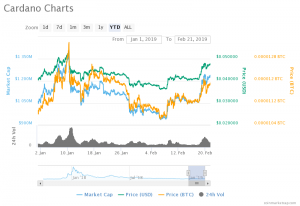 Based on the reports from CoinMarketCap, Cardano (ADA) is the 11th largest cryptocurrency with its market cap value as USD 1,228,363,768 on February 21, 2019, at 11:44 USD which is relatively lower by 12.09 percentage from the value of 1,397,272,338 USD on  January 10 at 09:34 UTC. The overall market has been on an uptrend with inconsequential lows. The market value reached its lowest on February 06 with its MCap value – 936,855,525 USD. However, the current value shows that the market boomed 31.12 percent high since then. The 20-day Exponential Moving Average also shows that the market is an uptrend, with its values rising from 998,033,597 USD February 1st to the current value by23.08%. This significant growth pushes the digital currency into bullish pressure.

The 14-day Moving Average of this digital currency also exhibits an uptrend with Mcap value increasing from February 07 to the current value by 29.60%. With the bullish market, traders can invest in this cryptocurrency to keep the market uptrend and be the receiver of good profits in the future. Since, the market balance points in favor of the buyers, a long term investment by the investors on ADA would work beneficially for them.

Price analysis of Monero (XMR) and its growing market

Cardano (ADA) Is a Buy on 2022 Network Growth Plans