ICON is a blockchain technology and a network framework designed to allow independent blockchains to interact with each other and is denoted by ICX. The company’s’ interconnected blockchain allows participants to converge at a central point in a decentralized system. Blockchain technology can be used for exchanging information and for transactions- like securities, currencies, business contracts, loans, intellectual property, and personal identification. These blockchains are managed by a particular network. ICON has been making an effort in connecting different blockchains and allowing individual communities to retain control of their own policies to minimize the possibility of any conflict. A decentralized exchange connects the communities to the ICON network, which allows the maintenance of a verified ledger shared within the community, where the community is comprised of a network of Nodes. The communications between the communities are done by the ICON Republic and Citizen Nodes.

The C-Nodes are responsible for governing and maintaining the community’s blockchain because each community operates on its own rules and consensus algorithm. The citizen nodes are gateways for the individual to connect to ICON’s network. 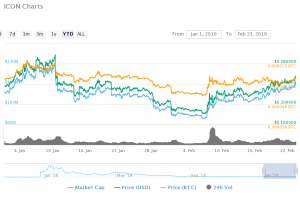 According to stats from Coinmarkcap, the corresponding market cap value of ICON (ICX), the 42nd largest cryptocurrency, on February 23rd at 11:49 UTC is $119,857,453 for its 24h volume of USD 6,076,119 which is relatively higher than its value of $86,009,863 on February 06 by 39.35%. The cryptocurrency’s market value started on a good note at the beginning of January; the MCap value saw its all-time high of USD 138,757,849 on January 10th. However, it dipped drastically after that and went downhill until February 6th. Nevertheless, the numbers began to rise and have been steadily increasing after February 7th. The 20-day exponential moving average shows a significant rise in values. The numbers rose from 89,813,759 USD on February 3rd to 119,857,453 USD – the present day value by 33.45 percentage. The stability in ascending values pushes the digital currency’s market into bullish pressure.

CoinMarketCap has also been observing the prices of USD and BTC along with the MCap values. The present prices of USD and BTC on February 23, 2019, at 11:49 UTC are 0.253181 and 0.00006374 respectively. Stats show that BTC has taken the lead, followed by the MCap/USD pair. There were price swings in the price of BTC when it started low in January and reached the peak before going downtrend again. However, the price of BTC was at its lowest on February 6th with value 0.00005341 and has bounced up 19.34% to reach the present-day value. Both the pricing and the MCap values have been on a similar wave, with the same level of ups and downs. The market reached its pinnacle on January 10 at 08:34 UTC with its MCap value as high as 138,757,849 USD, the prices of USD and BTC were $0.293105 and 0.00007233, and the 24h volume was $10,608,723. The numbers went downhill after that, but it started ascending as fast as it went down. The cryptocurrency reached its milestone with the price of USD shooting from 0.181683 USD on February 06 to 0.230633 USD on February 12, a 26.94 percentage growth within a span of 06 days. Read more and get more information about ICON price prediction, live price and news updates by experts.

The 14-day Moving Average of this digital currency also exhibits an uptrend with Mcap value increasing from February 09 to the current value by 15.88%. With both the moving averages on an uptrend and the bullish pressure on the market, the cryptocurrency’s balance is in favor of the buyers both long term and short term investments. Investors would see a good profit if this market trend continues in the future. Similarly, traders investing in this cryptocurrency will increase the value of both the currency and their investment.

GoChain, the Provider of Scalable Blockchain, Turns 1; Rebrands with Extended Concentration on Enterprise