Get to know the power of a tweet and the man behind the tweet. Elon Musk’s tweet that Tesla would no longer be accepting bitcoin (BTC) for car payments, reversing an earlier decision which sent BTC price soaring, sent the crypto markets in a tizzy including the likes of Bitcoin, Ethereum, Dogecoin and Cardano. The crypto market crash followed Elon Musk’s tweet that due to consumption of vast amounts of energy used to mine bitcoins, Tesla would fall back to accepting only traditional currency for its cars. On May 12, bitcoin fell by 12% wiping out $100 billion from its stated value. 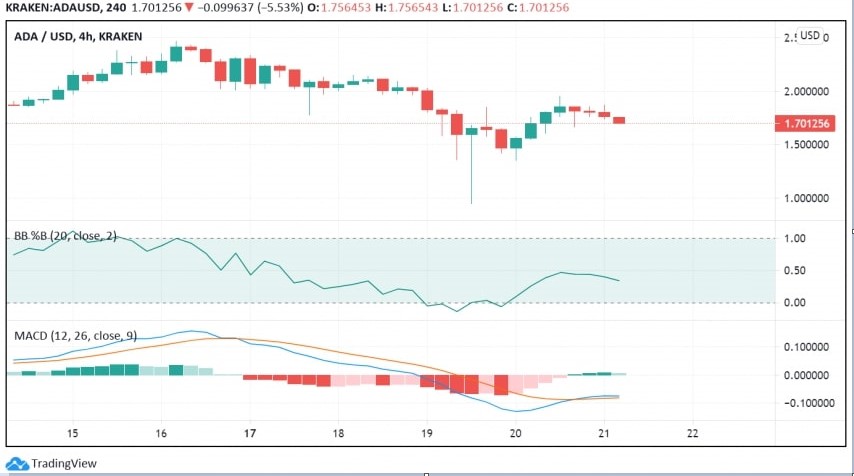 Not just BTC, the total value of all cryptocurrencies fell by around 10%. Ethereum price fell by 12% and dogecoin by over 20% in the 12 hours following the tweet and more than 34% over the week closed. This was remarkable given that it had outpaced bitcoin nearly 100 times over 2021. Though Cardano dropped immediately after Musk’s tweet, it regained significantly by 8.6% over the previous week. Though Cardano crashed it tested really important support on the charts. BTC and ADA charts continued to approach oversold areas on the macro charts.

Cardano price regained 12% over the 24 hours following the May 21 crash and on that day traded to USD at $1.70. IOHK’s announcement of launching a token converter that would allow users’ ERC20 token to move to Cardano’s blockchain fuelled this bullish trend. This will also drive up the blockchains network DeFi appeal considering a lean towards ethereum. Since August 2020, when ADA launched its staking, the cryptocurrency has been gaining favour and now occupies fifth rank amongst all cryptocurrencies as per data available from CoinMarketCap.

Despite the current recovery and the fundamentals, the outlook for ADA remains bearish. This is borne by the analysis of the moving averages on the four hourly charts. A bullish indicator is however seen on the MACD indicator on the H4 chart. Depending on how much buying interest can be generated in the short term, the price is sitting just above $1,63 as on May 21. The price could rise above $2 if more buyers step in. If,however, the mood dampens, we could see a bearish trend with the USD/ADA support level near $1.50, according to a report.

Undoubtedly, following the crypto crash, Cardano price prediction continues to retain heated debates and interest. “Fibonacci Extensions drawn from the all-time low to the current swing structure show a move towards the $5 range is likely. However, the 2.50 level is a psychological price level that could turn into the top of this current impulse wave. But in all of the most recent analysis we’ve done over Cardano, the price levels that most frequently show up over the past couple months are within the $3.00 to $3.40 range. Let’s assume that $3.20 is the likely high of Cardano’s range,” says Jonathan Morgan, ExchangeRates as quoted in a report in nasdaq.com.