Monero is a decentralized blockchain which allows for complete anonymity of transactions of its users when transactions are performed on this network. The coin was introduced into this market as ‘BitMonero’ and later rebranded as Monero. It works on CryptoNight algorithm to secure its network and offer privacy to its users.  This protocol allows for transactions on the blockchain to be mixed with each other, making it difficult to trace where they actually originated from. This algorithm is not compatible with ASICs and allows for more decentralization. Monero mining can be done exclusively via CPUs or GPUs. The cryptocurrency’s key features include Privacy, Fungibility, and Decentralized. XMR denotes its cryptocurrency with a total supply of million coins. 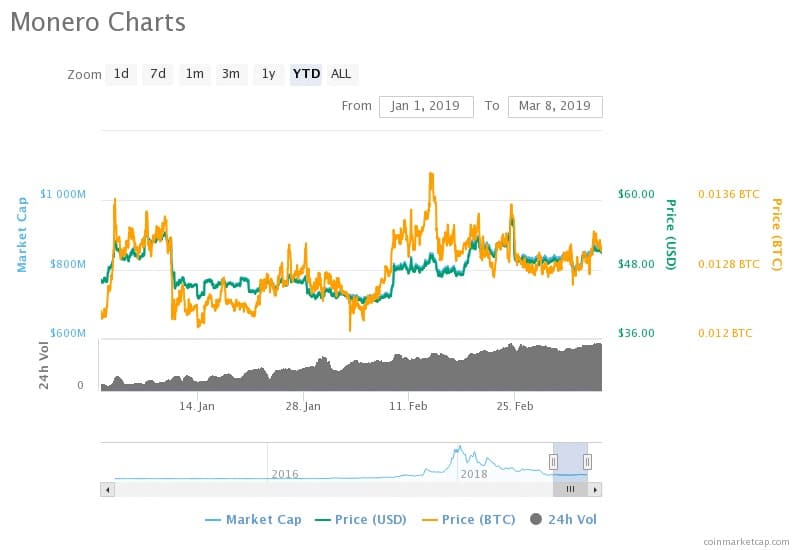 Monero (XMR) is the 13th largest cryptocurrency in the market with its current market cap value of USD 856,655,089 as on March 08 at 10:34 UTC. Based on the analysis by Coinmarketcap, the MCap value is based on the circulating supply of 16,840,880 and the corresponding 24h volume of $74,277,203. The latest value is higher than its relative value of USD 723,371,761 on February 08 by 18.43%. The market traded above 750 million USD at the beginning of January and crossed 900 million USD on January 07, with an average increase in the value of 25%. However, the market value capsized on January 10 and had been on a downtrend till February 08, with its value reaching the lowest of USD 715,078,310 on February 04. For a brief period, the market had improvised and reached its pinnacle of USD 938,494,775 on February 24, compensating the losses during the downtrend. The turbulent market did not let the uptrend sustain for long, and the market value moved downhill reaching its present-day value, which is 8.72% lower than its peak value. The market on the downtrend shows the strain of the bearish pressure on the cryptocurrency.

Current price value of USD and BTC are $50.87 and 0.01300714 on March 05 at 10:34 UTC. The market trend shows that the MCap/USD pair has been overlapping each other and the current value of MCap and the price of USD and BTC are in sync with each other. The price of Bitcoin is on a swing with consequential differences in values. It reached its peak on February 14 with a value of 0.01390326 which is 6.45% higher than the current value. The price of USD, similar to MCap, was at its all-time low with a value of $42.64 and then bounced to its all-time high of $55.81 on February 24. The current price is an intermediary value with the percentage difference of 19.30 and 8.85 with its lowest and the highest prices. The currency reached its milestone with the rise in the price of USD between USD 47.10 on February 18 and USD 56.64 February 24, with a 20.25% increase.

However, the moving averages are not in support of the market’s progress. The 20-day EMA show shows an uptrend with the values increasing from February 16 of $799,674,677 to the present value by a negligible 7.13%. And the 14-day moving average shows a downtrend in the MCap value by 2.32%. The clash in the moving averages puts the crypto-coin in the bear market territory. As per XMR Predictions and considering the overall market, investors with long term investment plans should venture in this cryptocurrency.  As far as traders with short term plans are concerned, they will have to sideline, observe the trend and invest when it turns out advantageous.