Monero is a decentralized blockchain which allows for complete anonymity of the tractions for the users on the network. Monero uses the CryptoNight algorithm for its network security and privacy to users, which emerged from the CyptoNote protocol that allows the transactions on the blockchain to be mixed, making it difficult to trace the origin of the transaction. Since the algorithm is not compatible with ASICs, this allows for more decentralization which means this cryptocurrency covers larger demography. 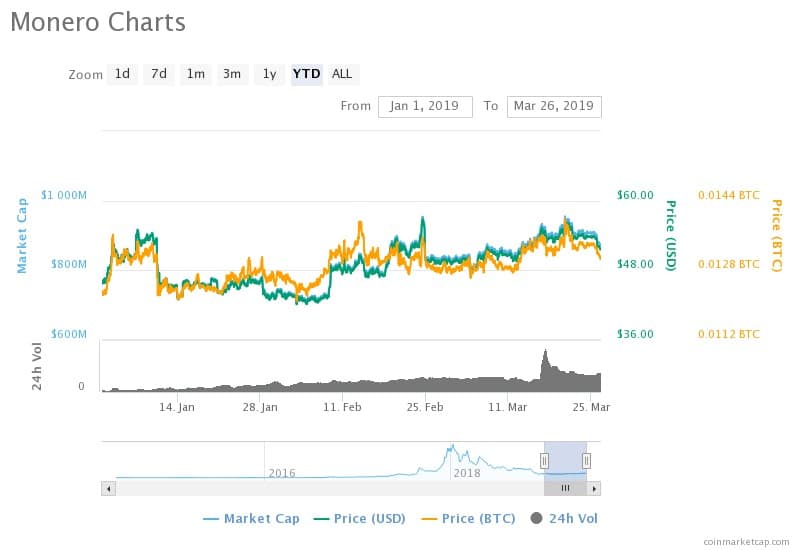 Long Forecast specialized in the financial market, shows that this cryptocurrency’s market will face prosperity by the end of 2019. It predicts the cryptocurrency’s range to be in between $554- $638 in April 2020 and further increase by 46-48% at the end of December 2020. Trading beasts also estimate the value of XMR to rise to $150 at the end of 2019 and further increase to $200 by 2020. The cryptocurrency is expected to pick its pace from the second quarter of 2019. However, the current market is on a downtrend. Analysis from wallet investor states the current value of XMR estimated to be 51.68 USD  would face a downfall with the value reaching an average of $5.302. The cryptocurrency is in for a major deflation in the future.  However, Monero is being accepted globally after the back up from Ledger Nano Wallet. It also is working towards upgrading its technology like GUI with subaddresses, multi-signature, etc. This should bring about a positive change in the future.

However, the current market growth is not in support of the investments. The future holds good for the investors according to the XMR Prediction. Nonetheless, the current market and its downfall do not show a favorable outcome to the investors. Hence, it would be advisable to wait until there is a growth in the market as per predictions. Once there is a stable increase in the values, the investments would yield higher profits.