Monero is a decentralized blockchain which allows for complete anonymity of the tractions of the users when this network is used. This digital coin concentrated on the shortcomings of Bytecoin and ended up being the platform for anonymity. Its cryptocurrency is denoted by XMR, with a total supply of 18.4 million coins. Monero uses the CryptoNight algorithm for its network security and privacy to users. 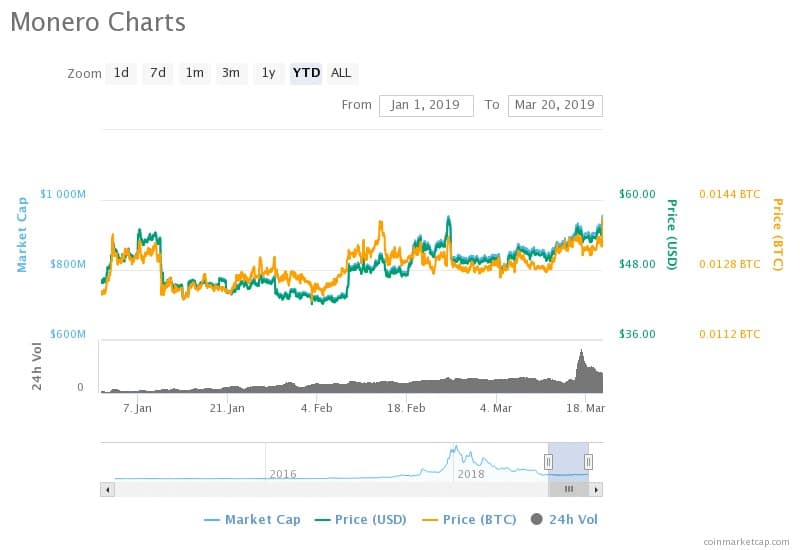 Monero is the 13th largest cryptocurrency according to CoinMarketCap. The market value of XMR for its 24h volume of $98,562,062 is $65,943,976 USD on March 20 at 14:14 UTC. The marketcap value of Monero has been wavering since the beginning of 2019. The currency reached its peak on January 07 with its market value reaching 910 million. However, the values dipped between January 11 and February 08, reaching its lowest of USD 725,585,153. The market started to improvise only after February 8 with a minute increase in values. The market cap value grew by 31.06% from the lowest value on February 08 to the present day value. The 20-day EMA also exhibits an uptrend in the values. The percentage increase of 13.18% from USD 835,554,320 on February 28 has been significant.  This shows that the bulls have the upper hand on the digital currency’s market.

The price of the XMR/USD pair is $56.39, and that of XMR/BTC is 0.01392458 on March 20 at 14:14 UTC. Based on the analysis by Coinmarketcap, the data about the trading moment of price and Market Cap value has been deducted. The reports show that the price of BTC has been ruling the market with the MCap value and price of USD beneath. However, all the values merged on February 19 and have been overlapping each other ever since then. The price of USD, similar to MCAP values, reached a low on February 08 with the value of $43.25 and gradually increased to reach its all-time high on February 24 with the value of $56.68. The current value is almost equivalent to its all-time high and greater by 30.38% from its lowest. Nonetheless, the cryptocurrency reached its milestone between February 22 and February 24, when price rallied from $50.34 to $56.68 with a 12.59% increase in the shortest span of 02 days.

The 14-day moving average shows values ascending from USD 853,154,062 on March 06 to the current value with 11.46% hike. With both the averages going uphill, the cryptocurrency has entered the bullish market. Though both the averages point towards the bull, the percentage rises for both are not outstanding. Hence, as per Monero future price, investors with long-term investment plans would find the market in favor of them. However, traders with short term investments will have to observe the market trend before investing. Once the values increase steadily, it will turn out advantageous for the traders, and they will attain more benefit from it.

Bank of Mexico Regulations Would be Affecting Crypto Badly