Monero, a decentralized blockchain technology particularly focused on privacy and anonymity of users, was launched on April 18, 2014. Originally known as ‘BitMonero,’ Monero uses CryptoNight algorithm to secure the network and privacy of users. The CryptoNight algorithm is far more secure and advanced than that of the SHA-256 which is used in Bitcoins. The cryptocurrency of Monero is denoted as XMR. Interestingly, Monero is similar to Linux, i.e., no organization is in command of it. Instead, a community of dedicated users regulates and maintain Monero. Riccardo Spagni is the most popular amongst them. 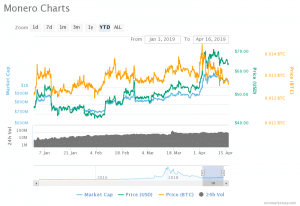 In the digital domain, privacy and anonymity are must needed feature and these are the core feature of XMR. Clubbed with fungibility and decentralization in a true sense, Monero is a futuristic technology in all sense. Lack of fungibility is a major problem with cryptocurrencies. It refers to the characteristic of equal units of currency to be valued equally regardless of their source or usage. This is the reason for the backlash of many cryptocurrencies as blockchains are public, and coins can be blacklisted based on their source. XMR was trading at around $8 during the end of 2016, but rose rapidly and touched $400 in just about a year, yielding 50 times ROI. According to various analysts, Monero will cross the $1000 mark as well, due to its increasing adoption and being recognized by a wide range of sources.

Monero After Drawing a Bullish Crossover Trades at $104