Monero is a cryptocurrency built on a blockchain technology. Monero is used for sending and receiving payments. Monero’s technology is completely different from that of bitcoin and it was built with the intention to improve on the lack of privacy that BTC has. During Monero transactions, the information of both sender and receiver remains private. Each Monero transaction is also unlinkable, untraceable and private. 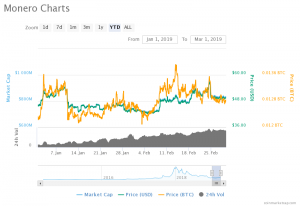 According to the XMR Price Prediction, the price of XMR can be around $638.73 in one year. The crypto analysts predicted that by the end of 2019, XMR can touch the mark of $350-$400. Based on the privacy feature of Monero, it can be one of the top 3 performing cryptocurrencies in this year, as predicted by Oracletimes. By December 2020, the price of XMR can be around $810- $945. According to John McAfee, a renowned cryptoanalyst, XMR can have the ability to challenge bitcoin after 5 years from now and its value will significantly increase at that time.

Considering all the above predictions, we assume that in the upcoming days, the XMR price will be mostly on the higher side and it can be a very good option for the long term investment.

Monero’s performance in 2018 was strikingly amazing and this is one of the significant reason why many investors have high hopes from this crypto. Cryptocurrencies with highly experienced developers and best technologies have the potentials to raise their value substantially in the future. Monero is definitely one of these cryptocurrencies as it has strong security and privacy concerns, upcoming technological improvements, excellent track record, and regulations. Apart from these, its future price range as analyzed and discussed above will have the propensity to be on the higher side so, all these are indicating that this crypto is definitely a good choice for long term investment.

One Can Expect Moderate Returns From Stellar This Year

One’s Current Investment On ETC Can Be Devalued In Future