Despite being down by close to 80% from its March 2021 highs, the XEM token has maintained its position in the top 100 cryptocurrencies. It holds the 75th position and a circulating market capitalization of $1.86 billion. NEM or New Economy Movement tracked its inception to 2015 when its main net was first launched. It used blockchain to provide solutions for businesses and individuals alike.

It uses the XEM open-source cryptocurrency and offers several anomalous features compared to crypto leaders of that time, be it Bitcoin, Ethereum Classic, or other leading cryptocurrencies in 2015. For example, NEM uses a unique system called Proof of Importance over PoW or PoS. This algorithm ensures that all transactions are processed and recorded in a timely sequence.

Further to the algorithm, NEM offers delegated harvesting and rewards those users who used it the most. It even supports features such as multi-signature contracts, encrypted messages, a reputation system, and a notary system to check the authenticity of the files on its blockchain.

After rising to a decent level close to $1, XEM has been trading negatively compared to its value on 1st January 2021. After close to six months, there is finally some indication of an up move as XEM retests the 200 DMA levels. 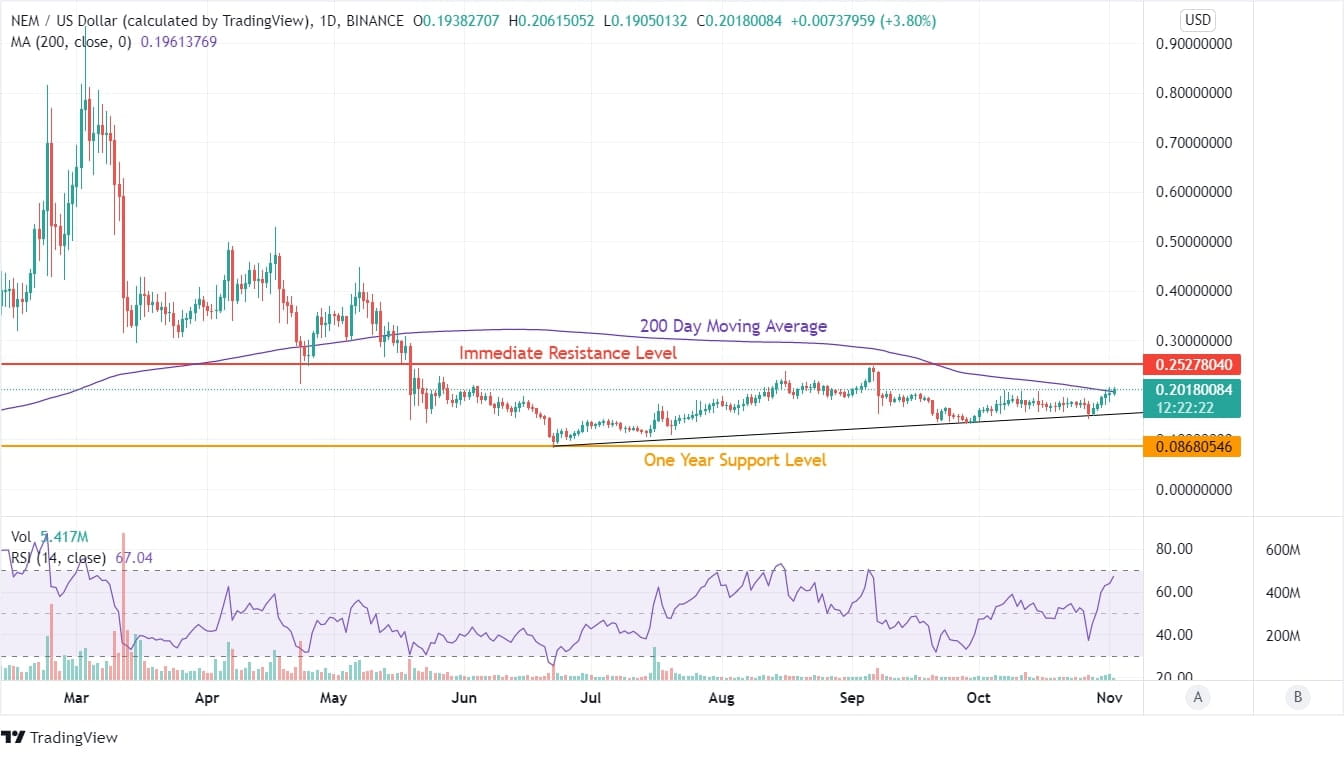 XEM cryptocurrency finally indicated some strength after the sell-off on September 07, which stopped it from breaching the 200 DMA levels. XEM has an immediate resistance level of $0.25 with the strong support of $0.086 and has been following a smaller trend line with potentially smaller returns since July 2021.

Since 200 DMA has fallen by a considerable margin, it has become easier for XEM to breach this important level. Still, the $0.25 level would be a strong resistance for it to breach. But if it gathers enough volume, as we witnessed in March 2021, we can expect XEM to hit at least $1 in the near term.

It will be difficult to judge its long-term potential till it gains the $1 valuation. RSI has shown a spike in buying interest, but the same is not being reflected in the daily transaction volumes. According to our NEM price prediction, holders of XEM should maintain caution but continue to hold this coin as a breakout can propel it to much higher levels.

Got rugged in NFTs? Don’t worry, we’ve all been there. A reverse rug that refunds people, though? That’s rare…