Launched in 2015, NEM (XEM) is a two-layered blockchain technology executed in one of the most popular programming languages, i.e., Java. NEM is an acronym for New Economy Movement. In NEM blockchain, there is a mainnet that supports multiple ledgers and has a Smart Asset system. Further, nodes on the NEM blockchain process the application programming interface calls. The currency in NEM, i.e., XEM is obtained using its Proof-of-Importance (POI) algorithm. For any NEM user, the ‘importance’ is determined by the number of coins they possess along with the number of transactions associated with their wallet. On top of that, NEM has features like an encrypted peer-to-peer messaging system, multi-signature accounts, and an Eigentrust++ reputation system. 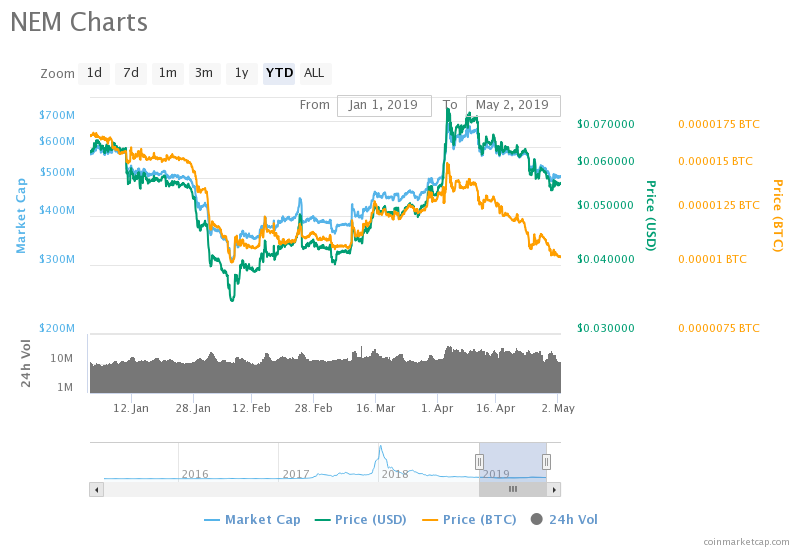 Analysts have a positive view regarding NEM (XEM). The reason behind it is Mijin, which is a private blockchain built using the NEM software. For any blockchain, in order to tackle the problems of tomorrow, risk management and low cost of the transaction are the important parameters. And these are the areas where Mijin provides an upper hand to the crypto. According to some fintech companies, it will reduce the costs of banking by up to 90% while making banking more secure. Additionally, and in accordance with that, there are speculations that NEM (XEM) will easily stand out as the top 5 most valued cryptocurrencies in 2019. This is the reason why many investors are looking out for it beside the current bearish trend. At the time when the whole crypto market is acting bizarre and going through a price correction, the cryptocurrency has almost maintained its significance.

The Battle of Bitcoin (BTC) Vs. Gold Has Begun #DropGold Campaign