NEM (XEM) is a leading cryptocurrency, and the coin is mined through its POI (Proof-of-Importance) algorithm. It was launched in 2015 backed by a dual-layer blockchain that is written in Java. The other major features of this coin include mini-signature account systems and encrypted messaging. The NEM stands for New Economy Movement, and the platform has two stages for making transactions, they are the NEM Infrastructure Server (NIS) and a client for interacting with the nodes. 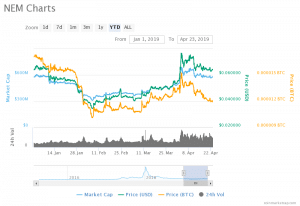 As mentioned earlier, the price is now hovering around 0.064 USD and with many variations in pricing; we predict the coin to dwindle further. In the coming two weeks, it may reach the lowest point. But after that, it will gain momentum and grow until it faces resistance. The resistance should be at 0.072 USD. The long term outlook is bullish. The price should be at 0.3 USD to 0.5 USD by the end of 2019. 2020 outlook also is bullish for this coin.

We advise the short term investors to stay away from the coin as variations are huge. Medium term investors and long term investors will be paid a huge dividend if they hold their investments without panicking throughout the year leading to 2020.

Ripple (XRP) Predictions: Ripple’s Bull May Have to Climb the Hill at 0.36 USD