Neo (NEO) is a digital ecosystem with components like digital assets, digital identities, and smart contracts. It is previously known as ‘Antshares.’ It is based in China and the big Chinese potential has helped the coin to be named as “Chinese Ethereum.” A large number of users on this platform has been profited by the ICO of Neo coin. This platform works on a dual token system – dApps and ICOs. It relies on its own algorithm – Delegated Byzantine Fault Tolerance (dBFT). This protocol is claimed to be faster than the protocols used by other major coins. 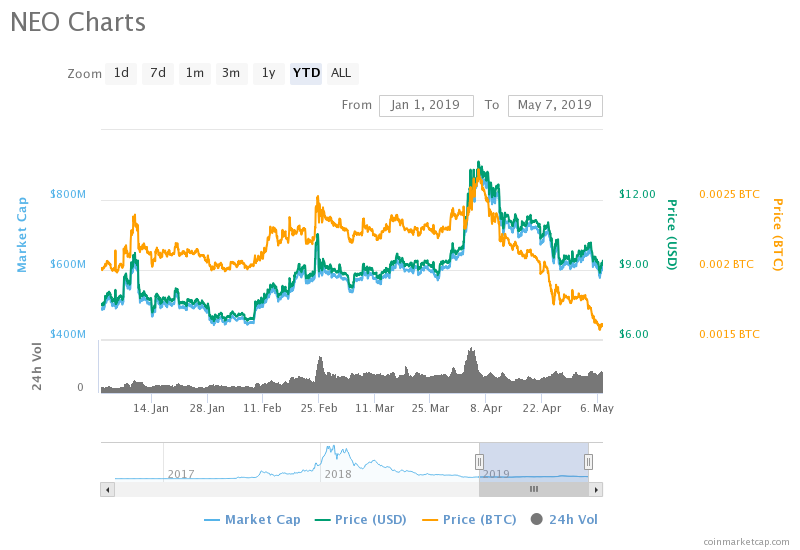 Neo coin started the year with a humble figure of 7.55 USD. However, for a large part of this year, this coin fared well. The lowest point of NEO was on 7th February at 6.80 USD. It gained the highest after 1st April by 30% in just 6 days. The value of each NEO coin is undergoing through a price correction stage as of now. The market cap on 7th April was 837,353,385 USD, and the value of each coin was 12.88 USD. The value of each token in terms of USD has decreased by 27.01% in these 30 days.

Neo’s current market fall is here to stay. It will now grow and face one resistance at 13 USD. On the basis of NEO coin price prediction, we can predict the coin to reach as high as 20 USD by the end of 2019. And in the longer term, the coin will breach the 50 USD target.

This is the best time to buy NEO coins. Looking at the bullish trend, we advise the long term holders to wait at least until the value reached 20 USD.

With the Onset of Litecoin’s Recovery, Investors Are Investing in Litecoin

IOTA (MIOTA) - Promising to Retain Its Value in Future