Da HongFei and Erik Zhang developed neo in 2014. Formerly known as Antshares, it is an open source blockchain based smart contracts platform enabling the development of decentralized applications (dApps). Unlike Bitcoin or Ethereum, the platform uses Delegated Byzantine Fault Tolerance algorithm for faster transactions making it a preferred choice among the investors as well. In a very short span of time, the coin has made it to the top 20 list, has been in the news for inking some key strategic partnerships and portraying a transparent roadmap to the future. The crypto is reshaping the world of digital payments and outlasting its competitors regularly. The team of core developers, as well as the community of followers, aims to revolutionize the digital economy through customised solutions for each & every business, industry and sector. Let us analyze the NEO coin price prediction chart. 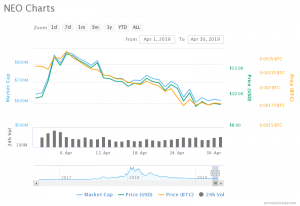 NEO team has recently announced its partnership with Zeux enabling the usage of the coin on Apple Pay and Samsung Pay platforms. The coin has been in the news since some time now for its increasing partnerships and adoption at larger fronts. The team also has been supporting game developing community immensely through conferences and sessions across the world. The project is attracting key partners from the enterprise world as well, and it’s just a matter of time before it becomes publicly accepted substitute of the traditional mode of payment. Hence, two years down the line, the price of the coin can be expected to reach USD 20 – USD 50 and in the next 5 years, it can be as high as 100 USD.

Where Does Cryptocurrency Currently Stand With Banks?