NEO, formerly known as Antshares, focuses on building a smart economy by blending digital assets, digital identities, and smart contracts. It is a blockchain platform that is designed to build a scalable network of dApps. NEO tokens generate a slow deflationary amount of GAS tokens which are used to pay for transactions on the network. The inflation rate of GAS is controlled with a decaying half-life algorithm that will release 100 million GAS over approximately 22 years. NEO uses delegated Byzantine Fault Tolerance consensus technology to facilitate up to 10,000 transactions per second. 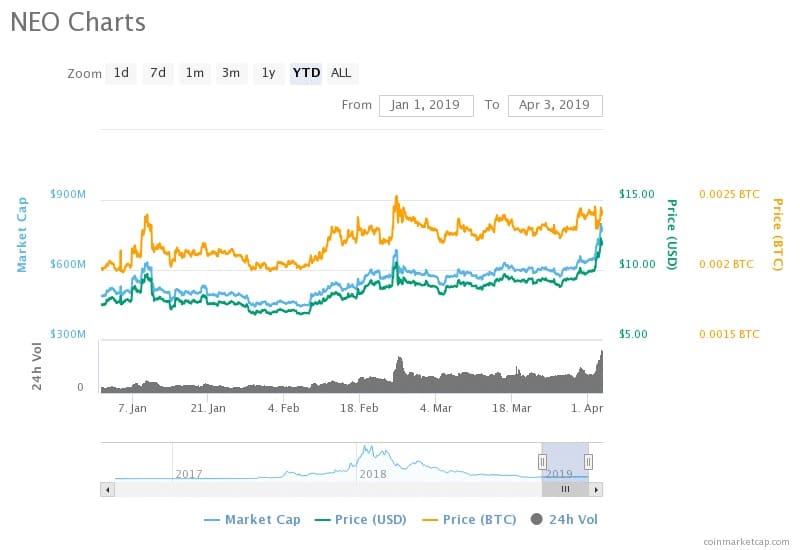 NEO’s market cap traded as low as 480 million USD at the beginning of 2019. It peaked crossing 620 million USD before capsizing and going through a downtrend period of one month between January 11 and February 11. The lowest trading price was 6.92 USD for the Mcap value of USD 449,564,527 on February 08 at 09:34 UTC. However, NEO’s market started improvising with the increase in values. The price reached a high of 10.53 USD on February 24 with the MCAP trading at USD 684,505,976, higher than its all-time low by 52.26%. The current trading price and values are NEO’s all-time high with an average hike of 14.04% from the past peak value. The moving average is also in support of the market’s overall uptrend.

The price prediction of this highly volatile cryptocurrency is rather difficult. However, analysts from crypto ground estimate that the current growth of the cryptocurrency will continue for a longer period of time with the price increasing to 33.2141 USD, growth percentage of 172.72% in 2020. And by the end of 2024, the price is estimated to upsurge by 1477.89% reaching 190.7664 USD, making NEO the dependable token for long term investment plans. Contradicting to the above analysis, wallet investor forecasts deterioration in the pricing of NEO. According to the analysts, by the end of 2019, the price per NEO would drop to 2.172 USD and a gradual increase in price up to 10.303 USD by the end of 2024.

The current market with its uptrend values, backing moving averages and the bullish pressure, holds good for the buyers. The traders will benefit from the higher fluctuations in the pricing values of the cryptocurrency with their short term plans. If the predictions are achievable, investors will also benefit heavily from the growing price of the cryptocurrency in the future.