Neo (NEO) was formerly known as Antshares. It aims to set up a smart economy with a primary focus on digital assets, digital identities, and smart contracts. It is also known as “Chinese Ethereum” as it initiated digitization of Assets in China. As China is a huge economy, the launch of NEO has helped to gain a huge number of users on its platform. It has a dual token ecosystem containing protocols for dApps and ICOs. It claims of using an algorithm called Delegated Byzantine Fault Tolerance (dBFT) which is faster than the PoW used by Ethereum and Bitcoin. 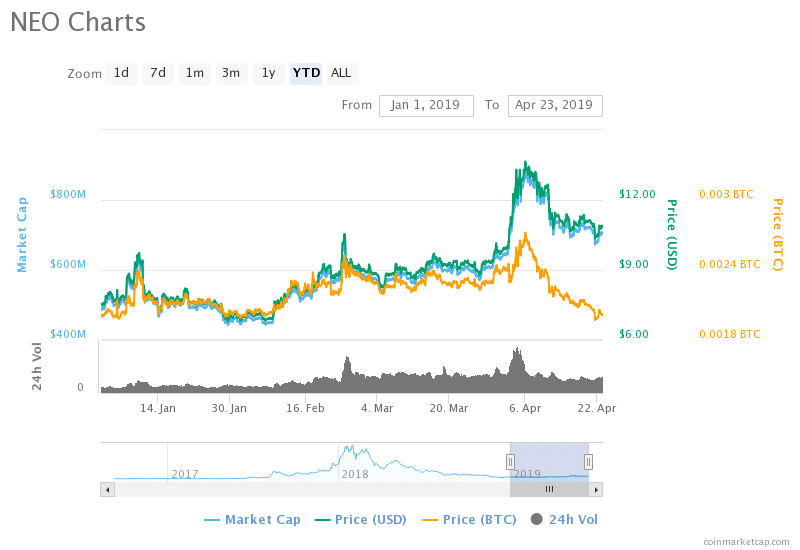 According to the NEO price prediction chart, the coin is now roaming around 10 USD. After the huge gain on the 1st week of April, the price is undergoing a correction. We predict the price to be down by a further 1 USD to 1.5 USD. After this correction, the coin is likely to gain momentum. The growth will be interrupted by resistance at 13.5 USD. The short term outlook is bearish for the next two weeks. The medium term, as well as the long term outlook, seems completely bullish. By the end of the next quarter, the price should be around 15 USD. By the end of 2019, the value is predicted to be near 25 USD.

We advise the short term investors to wait for the right to secure a buying position. Long term investors will be profited by 2 times of current price if they hold their investment until the end of 2020 1st quarter.