NEO referred to as “Chinese Ethereum,” is the first digital coin from China designed to digitalize the various assets and to implement the transactions with the help of smart contracts. NEO’s launching has affected the blockchain positively with an increase in the number of users adhering to it. It works in building a smart economy by bringing together digital assets, digital identities, and smart contracts. NEO has a dual token ecosystem which is used for creating dApps and ICOs. Neo uses unique technology- Delegated Byzantine Fault Tolerance (dBFT) consensus algorithm that beats PoW used by ethereum and Bitcoin. 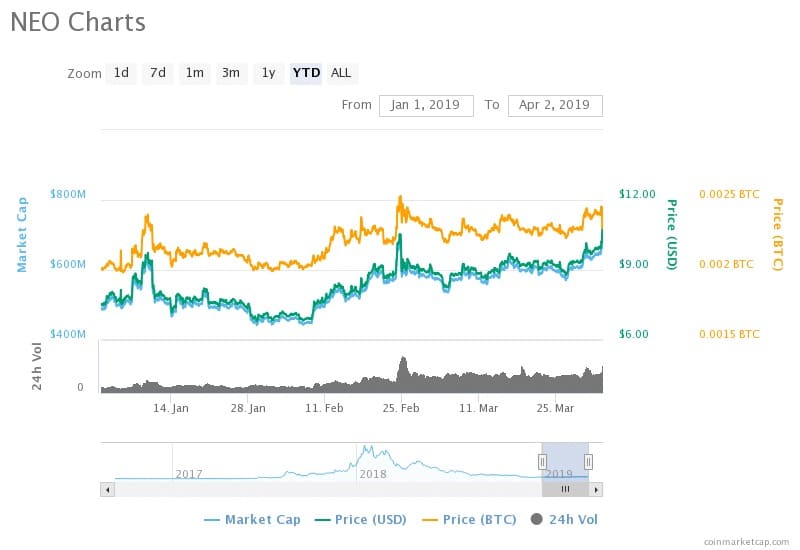 NEO is a potential cryptocurrency that can be invested for a long time. Hence the NEO price prediction is pretty difficult. However, Being crypto expects that NEO will reach a high of 120 USD by the end of 2019 and 200 USD by 2020. Furthermore, it predicts a hike in price up to 450 USD by 2024. This based on the ability of the token to surpass its counter cryptocurrency. Smartereum believes that NEO would increase by an average of 1.5X every year and concludes that the price might shoot up to 1275 USD per token by five years. In contradiction, Long forecast expects depreciation in values by the end of 2019 with values touching 9 USD, which is a high possibility with the current volatility of the cryptocurrency. However, it estimates a price increase up to 21 USD by the end of 2020.

The current peak price, the bulls pressure, and other technicals point towards the inclining market for NEO. However, the volatility of the cryptocurrency does not give the investors with long term investment plans any hope currently. This market can be taken advantage by the traders though. Their short term plans will benefit with higher outcomes and proportionally increase the value of the currency, minimizing its characteristic volatility.