Neo (NEO), formerly known as Antshares is a platform catering digital assets, digital identities, and smart contracts. It aims to establish a smart economy with the help of blockchain technology. It is known as Chinese Ethereum, and its Chinese origin has helped the coin to gain a number of users on its platform. Recently there were stories of Neo getting along with Apple Pay & Samsung Pay to include its smart platform on these major payment systems. 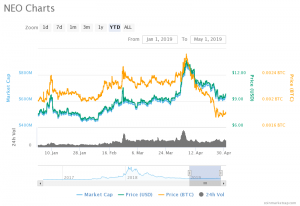 The value of NEO has been subject to many price variations in the last 4 months. It reached the highest after the 1st April boom at 13 USD. Prior to that, the coin has seen many ups and downs in its course. The lowest value was seen on February 08th at 6.9 USD. The market cap on 1st April was 643,493,668, and it is 1.52 % more as compared to the current market cap. And the value of each NEO coin was traded at 9.90 USD on 1st April. The value of each coin has decreased by 1.51 % in the last 30 days.

Though the market of NEO is on a downtrend, the value is likely to rise in the near future. With some tie-ups with major MNCs and launching of all new NEO 3.0 will surely boost the value. As per the company sources, the launch will enhance the speed and stability of the coin. This will also attract many new users. So, by the end of this quarter, the value should be past 12 USD level. The resistance should be at 14 USD. From there it will have a stable path. According to the price prediction for NEO, the coin should reach as high as 50 USD by the end of 2019.

As there are many big events in the pipeline of NEO, investors’ confidence is to increase. This will surely bring more value to the coin. This is the perfect time to buy NEO coins at such a low price. Long term investors are advised to hold the coin at least until the 1st quarter of 2020.