NEO is developed by Erik Zhang & Da Hong Fei in 2014 and is based on the blockchain technology. The platform can be used to create a decentralized application and build ICOs as per the feasibility and requirement. Recently the team has launched Switcheo, a decentralized exchange for cross chain trades between Ethereum and itself has become the first of its kind to enable such exchange. NEO, which was formerly known as Antshares & got rebranded in 2017 uses Delegated Byzantine Fault Tolerance (dBFT) algorithm for faster transactions. The aim is to develop a smart economy through integration of digital seamlessly. 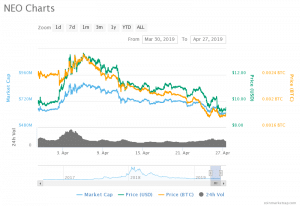 In the next 2 years, the price of the crypto can reach as high as 500 USD and in the next 5 years, it can be around 1000 USD owing to its innovative features and technological backing. The NEO team has also built a gaming ecosystem which supports Unity, Cocos among other mainstream engines. The platform allows amateur game developers to use NEO guidelines and develop games of their choice and according to their expertise. Recently, an event was also hosted in Beijing on the usage of Blockchain in gaming development and it saw participation from gaming enthusiasts, key market players and thought leaders in the same & related sectors. With such events, the crypto is already gaining popularity among millennial, entrepreneurs and investors but the team has to look for lasting solutions generating continuous results for the coin to outlast its competitors and climb up the coin ladder. And it seems the team is already on it.

Zilliqa (ZIL) Price Analysis: With Or Without Facebook, Zilliqa Has Got The Wonder Broom To Fly High Soon