Bitcoin’s (BTC) dominance seems to be drastically diminishing. Recent research has revealed that there has never been such low interest in Bitcoin (BTC). With the advent of the bear market, many people also said in the cryptocurrency system “Bitcoin is dead.”

In a way, we all understand certain Bitcoin metrics such as current supply, price, and market cap. And then the dominance of the market is BTC’s percentage of all cryptocurrencies total market cap. But when we look at the ‘ market dominance ‘ of Bitcoin, we usually go to the CoinMarket Cap measure. A recent report by Bitwise’s asset management revealed that 95 percent of the volume of Bitcoin trading reported in unregulated cryptocurrency exchange was of a false or non – economic nature, following advice from the Securities and Exchange Commission of the United States. So such instance makes it clear that to understand the market dominance of Bitcoin, the further extensive study needs to be conducted.

Research shows that Bitcoin liquidity had to be calculated as a metric so that it had to be multiplied together to form a further metric called the Volume – Weighted Cap. This is why Bitcoin dominates other cryptocurrencies in the market.

Few analysts attribute several factors to Bitcoin’s declining dominance. They had said that the falling dominance of the past had preceded a large boom whereas others say that when BTC jogged at $ 1 K after plunging below $ 100, the rise and fall coincided with the first major bull race. 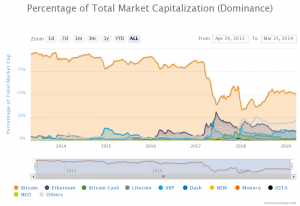 After feeling that the current 50% ‘dominance’ score did not provide a true representation, John-Paul Thorbjornsen, a leading bitcoin scientist suggested that a better reflection of Bitcoin’s dominance could include a certain liquidity measure or daily trade volume. The Pareto principle or 80/20 rule was his focus of research. This indicates that 80 percent of the effects are caused by 20 percent. Or in this case, 80% should be dominated by 20% of the cryptocurrencies market. The rule of balance is often present in nature. This principle is often used. The cryptocurrency trade can follow this pattern, which is a form of Power Law, as a free market.

Based on this John-Paul Thorbjornsen said,

Although the Bitcoin’s dominance in market share was affirmed, this week, crypto – monetary news was also revealed that BTC had a 4-month hash rate. Sources have shown that the hash rate was 52 quintillion, whereas the last peak was 54 quintillion in November 2018.

From a sentiment analysis perspective, industry leaders seem to believe that BTC will remain on this market. Phil Chen from the HTC division Exodus said he thinks Bitcoin’s core industry is fundamental, so it would be irrational to ignore and cast it aside. It is also irrational to ignore it.

Blockchain Boom in the Virtual Games Divisions, Trending Now More than Ever

Bitcoin Falls Back to Support; Will BTC Make a U-Shaped Recovery?