Bitcoin miners across the globe have been facing the brunt of the dramatic decline of the cryptocurrency market where Bitcoin’s value nosedived by 30% in a week. In another major blow, the government of Norway declared that it was going to stop electricity subsidies for bitcoin and crypto miners in the country.

According to sources, in the state budget agreement, it was decided that from January 2019 all discounts regarding electricity bills would cease to exist. Bitcoin miners in Norway would, therefore, have to pay the regular electricity tax in the country. The Directorate of Taxes had reportedly proposed removing the levy cut for bitcoin factories and other data centers that produce cryptocurrencies. 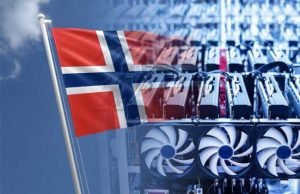 On this, parliamentary representative Lars Haltbrekken (SV) said, “Norway cannot continue to provide huge tax incentives for the most dirty form of cryptographic output as bitcoin. It requires a lot of energy and generates large greenhouse gas emissions globally.”

Presently, Bitcoin miners and data centers in Norway enjoy the same discount as other power-intensive industries which implies that those industries with a capacity of more than 0.5 megawatts pay 0.48 øre ($0.05) per kilowatt. This is expected to rise to 16.58 øre per kilowatt from January 2019.

Industry professionals have reacted differently to this new move by the Norwegian government. Roger Schjerva, Chief Economist of ICT Norway, condemned the government’s stance towards the mining industry saying, “This is shocking. Here, budgets have changed framework conditions without discussion, consultation or dialogue with the industry. Norway scores high on rankings of political stability and predictable framework conditions, but now the government is gambling with this credibility.”

He added, “The consequence of this will hunt the cryptovarians to Sweden and Denmark. We still need to supply power to these centers within the Nordic power market. We just say no to income and work in many municipalities in Norway. We can only hope that politicians understand that energy-intensive computing is one of the things we will be living in the future.”

On the other hand, some from the crypto and blockchain space have maintained a positive attitude regarding the government’s decision. Jon Ramvi, Chief Executive of Blockchangers (Oslo-based blockchain advisory group), said, “This is a win for the Norwegian people and our natural resources. Less mining in Norway will reduce the prices of electricity for companies and people residing in Norway meaning that we reap the benefits of these resources locally instead of giving it away to Bitcoin miners.”