The most popular and the largest cryptocurrency – Bitcoin is an open source digital payment currency that uses a digital medium of exchange and peer-to-peer technology to create and control monetary transactions on the exchange platform. It is a consensus network that enables the new payment system. The working methodology is very simple and can be done from the user’s computer or mobile devices. The mining of Bitcoin currencies is decentralized and competitive. The miners use specialized hardware to process the transaction and to secure the network.

Bitcoin mining is under process right now to reduce the cost of mining which will, in turn, give huge monetary returns. However, according to our BTC price Prediction, it seems that the current situation of the coin might be the same for some time.

The major features OF Bitcoin’s transactional properties include –Irreversibility, Pseudonymous transactions, speed, security, and high demographic coverage. After confirmation, a transaction cannot be reversed, shareholders, miners, user’s positions immaterial. And neither transaction nor accounts are connected anyway to real-world identities. The transactions are done across the world and are complete instantly making it fast and global. And, Bitcoin funds are locked in a public key cryptography system, which can be sent only by the owner of the private key which makes it a more secure cryptocurrency. 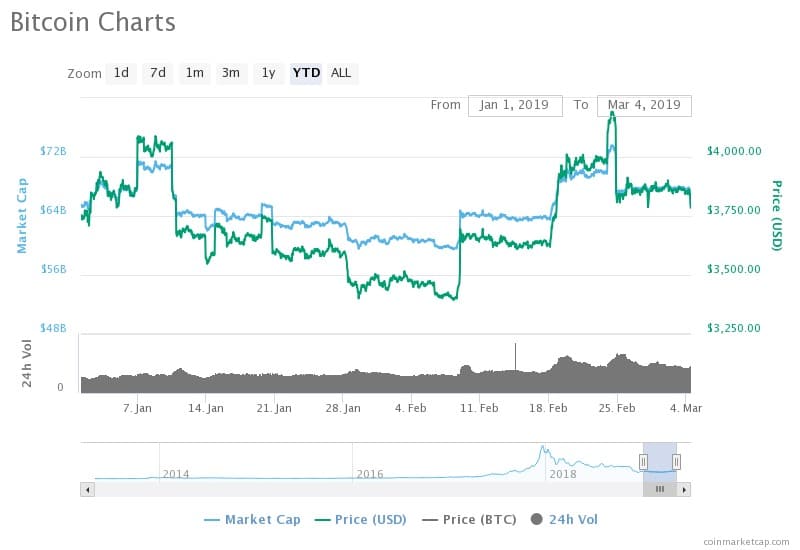 The recent analysis shows that BTC’s market dropped on February 25 and has been static ever since. The largest cryptocurrency is highly volatile with major price variations. The MCap value down drifted between January 10 and February 08, with the lowest of USD 59,475,635,104 on February 08 at 06:34 UTC which is 11.81% lower than the current value. The market opened with values crossing 65 billion at the beginning of January, after which came to the downfall. However, the market cap traded at its all-time high of USD 73,489,037,211 on February 24 at 11:34 UTC with the price of USD at its peak of USD 4186.20, compensating for the loss in the past. The value rose by 23.56% from its all-time low.

The 20-day Exponential Moving Average (EMA) exhibits an uptrend, with the values rising from USD 63,862,862,780 to the current value by 4.13 percent with a similar percentage difference in the price of USD. Unfortunately, the 14-day EMA shows a downtrend, with the MCap value of USD 68,590,605,762 descending to its current value by 3.05 percent. There has been a plunge in values by 2.03% in 24 hours period. The moving average shows an oscillation which points out the volatility of the cryptocurrency. With the current setback and the moving average degrading averages, the market balance is pointed in favor of the sellers.

The investors and traders with plans for long term investment will have to observe the market trend until there is a significant uptrend in the MCap values and prices. And, with the current trend, short term investments will not be beneficial too.

Is Electroneum (ETN) Worth For Investment?