Bitcoin Diamond is a hard fork of Bitcoin, at a block height 495866, comes with a few enhancements to the Bitcoin Protocol. It was introduced to improvise the transaction period, the transaction fees and to encourage more users to participate. Bitcoin Diamond miners will begin creating blocks with a new proof-of-work algorithm, and will consecutively develop and enhance the protection of account transfer and privacy based on original features of BTC.

Bitcoin which is the largest cryptocurrency has become difficult to use due to its growing market, and it’s not affordable for all types of customers. Bitcoin Diamond was introduced to overcome this shortcoming of Bitcoin. BTC and BCD are blockchain based networks, where users can store and transfer information. The difference lies in the block size where BCD network processes more information per minute compared to BTC. Also, there is a huge supply of BCD coins – up to 210 million, which ensures that the price of each coin is maintained at a level that is affordable for all users. BCD’s mining process is also easier when compared to BTC. Whilst BTC requires ASIC mining which is a huge and expensive process; BCD can be mined using GPU which allows more users to get involved in supporting the network. 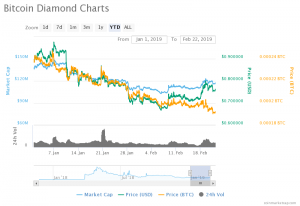 According to reports from Coinmarketcap, the market cap value of Bitcoin Diamond (BCD) as on February 22 at 10:04 UTC is USD 117,226,255. The corresponding price of BCD/USD pair and BCD/BTC pair are USD 0.762413 and 0.00019206 respectively. It is the 42nd largest cryptocurrency in the market. The markcap value has been majorly on the downtrend, except, the increase in percentage has been moderate. There was an elevated percentage value 14.06% between February 06 and February 22 (Current value) when the numbers rose from $102,778,904 to $117,226,255. There is a gradual increase to all the values – MCap, USD price and the 24h volume with the 14-day moving average. The MCap shows a meager 2.88% increase. Since BCD’s market value has been under the bullish pressure, the investors are enticed to invest in this cryptocurrency thus increasing the value further.

The 24h volume of BCD on February 22 is 1,270,146 USD (10:34 UTC).  The dip in values hasn’t been pivotal. Hence the market is considered to be on the uptrend. BTC has not joined the gain. According to Bitcoin Diamond Price Prediction, the analysis shows that BTC had dropped from an all-time high of 0.00024570 on January 6, 2019. Anyway, the high values did not sustain for long and have been on a downtrend reaching its lowest 0.00019082 – present-day value. However, the MCap value of the cryptocurrency surpassed the bitcoin’s value with its current value. The MCap/USD of BCD reached its all-time high on the closing of January 06, when it reached 150 million dollars at its peak price of 0.976052 USD. Nevertheless, the milestone BCD achieved was proved in February when it rallied from a low of $0.668451 on February 06 to a high of $0.787617 on February 19, which is a 17.83 percent increase within a short time period of 13 days.

The 20-day EMA shows that the current market is on the uptrend with respect to MCap, USD, BTC, and 24h volume. There has been an increase in value, an average of 6.53 percentage with respect to the market cap. Although the market has been on the rise with the bullish pressure, the increase has been slow moving with minimal dips. Hence, the traders and the community users ready to invest will have to sideline themselves, observe and explore the market trend and invest once there is a significant rise so that they can benefit from this digital currency.

Paris Blockchain Week Summit, the first international conference in France dedicated to the professionals of blockchain and crypto-assets 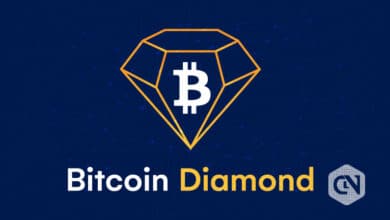 Bitcoin Diamond Loses a Subsequent Demand due to Price Slash