Dogecoin is an altcoin that was designed to reach a much broader demographic than Bitcoin. The developer, Markus, wanted to keep this cryptocurrency fresh and fun so that it was far off and separated from the controversial past of Bitcoin and other similar digital currencies. Hence, Dogecoin was introduced in December 2013, as a ‘joke currency’ featuring a likeness of Shiba Inu Dog from the ‘DOGE’ meme. However, it grew in value and created a whole online community with thousands of users sharing the currency and posting memes about it online. In 72 hours, from the time it was introduced into the market, Dogecoin jumped nearly 300% in value, bouncing from $0.00026 USD to $0.00095 USD, with a volume of billions of Dogecoins per day.

The coin reached a capitalization of $60 million USD in January 2014, pushing the currency amidst the top cryptocurrencies in the market. In comparison to other significant cryptocurrencies, Dogecoin had a fast initial production schedule, with 100 billion coins in circulation by mid-2015 and an additional 5.256 billion coins every year.  China’s decision to forbid Chinese banks from investing in the Bitcoin economy boosted the growth of this currency many folds. After its comeback from the online hacking, in January 2015, the trading volume of Dogecoin briefly surpassed Bitcoin and other cryptocurrencies combined. At the beginning of 2018, Dogecoin reached a $2 billion market cap. 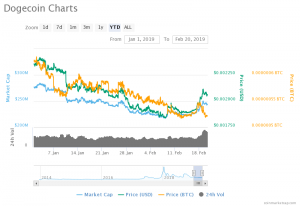 Based on analysis from Coinmarketcap, Dogecoin (DOGE) stands in the 25th position in the cryptocurrency market. The market cap value of DOGE on February 20 at 14:39 UTC was 245,536,073 USD. Recent reports show that the percentage value of DOGE’s MCap value has decreased in the recent past. The market cap value on January 20 was 254,689,518 USD, which is 3.59 percentage value higher compared to the current value. The survey on this cryptocurrency shows that, though there has been an equal number of peaks and downs, the market cap value has been gradually increasing. Doge’s value reached its peak in February 2018 and fell drastically in April 2018. Finally, the market cap value reached more than 75 million USD in the mid of September 2018, after which there has not been a notable increase in the value.

The 20-day Exponential Moving Average (EMA) exhibits an uptrend. The current Mcap value has increased from its respective value of $227,523,824 USD on January 30 by 7.92%. The 14-day moving average also points to an uptrend with a 9.81 percent increase. Since both the averages are ascending, the cryptocurrency falls into the bulls market. With the bulls’ pressure, the investors would be happy to indulge in long-term investments, and with the uptrend market, the balance falls in favor of buyers. Hence, traders with short-term investments are also advised to invest revenue which will be beneficial for both the trader and the DOGE’s market. However, to learn the future of dogecoin, you need to go through our DOGE Price Prediction so that you can understand when to invest in it to gain massive profit further.

ICON Aims to Build The Largest Decentralized Networks in the World

Huobi Token Recorded 6.7% Higher Trading Value in the Past Week 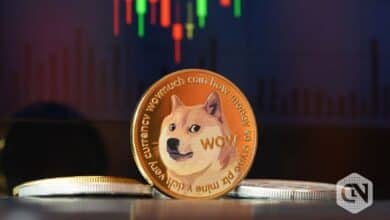 Dogecoin consolidates above 200 EMA with profit booking at $0.1!