Dogecoin (DOGE) was launched as a cryptocurrency that can be given as incentives for sharing content on social media like Reddit and Twitter. Moreover, the community treats Dogecoin as a fun kind of altcoin, having a greater appeal beyond the serious trading audience. 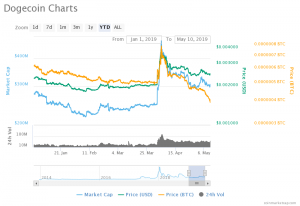 Dogecoin has gained a height of popularity from the very first day, thanks to the ‘meme’ and frequent tweets by Elon Musk. In addition to that, Doge cryptocurrency enjoys a passionate online community of users and developers, who are deeply invested in the coin. Not to forget that the community has achieved some ground-breaking feats like raising funds for the Jamaican bobsled team to go to the Sochi Winter Olympics, to construct a well in rural Kenya for providing access to drinking water for the local population. However, these are not the only things; it runs a campaign named ‘Dogecoin Socks for The Homeless’ that has been active for more than a year now. On top of that, they have their own pizza chain namely ‘Doge Pizza.’

Dogecoin-BTC pair is interlinked and just like any other crypto. The movement in Dogecoin is concomitant with the action in Bitcoin, and according to analysts, a bullish trend in BTC is soon to happen. So, as per our DOGE Price Prediction, it seems that the coin’ prices are low right now and it is a good time for buying, looking at the future of the altcoin.

Tron (TRX) Price Analysis: With Already 100 Million Transactions, Can TRX Suffice Its Investors In Future Too?

Litecoin (LTC) Price Analysis: A Breakthrough On The Upper Side Is Expected Till Next Week, Might Touch The Levels Of $90 By The EOY