Electroneum has recently been mentioned by a huge chunk of the coin of holders complaining of their inability to withdraw their coins. This has happened to the Electroneum coin traded on the Cryptopia exchange. It should be noted that the Cryptopia exchange had lost coins worth over $20 million in a hacking activity this year and ETN coin was also affected by that theft. Cryptopia has issued a statement saying this temporary block on withdrawal of Electroneum (ETN) and other ERC 20 tokens has been put for stopping a possible security breach.

Due to this stopping of transactions, the already battered Electroneum (ETN) has shown a massive downfall in the market. The value of each ETN coin may fall to the level as low as 0.0040 USD to 0.0035 USD in the coming times. Let’s have a quick glance at the current figures of Electroneum in order to understand the pattern in a better way. 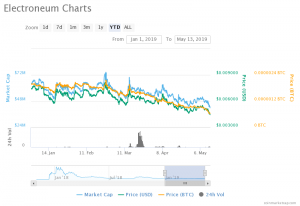 Electroneum (ETN) has shown many steep price variations since the very start of the year until now. This coin is probably the only coin which is not affected by the 1st April market boom. The lowest point of the coin was 0.0047 USD on 27th April and the highest figure was achieved on 25th February at 0.0082 USD. The market cap on 13th April was 53,131,049 USD and the value of each coin stood at 0.005734 USD and 0.00000113 BTC. The current market cap and the value of each coin in USD are 20.67% less than the figures for last month.

Staying out of the market is advised to the new potential buyers. Long term holding will profit the existing holders.