Electroneum (ETN) has recently announced that it had got approval from Apple to introduce the new update in its iOS App. It should be noted that Electroneum has a large base of iOS users. Through this new update, users will be able to get the facility of the “faster 30-60 second registration process.” This is definitely a good sign for the market of Electroneum as users’ base will be increasing with increased ease of access in the app. By the end of 2019, the value of each ETN coin should be at 0.01 USD. We should now analyze the current figures for ETN. 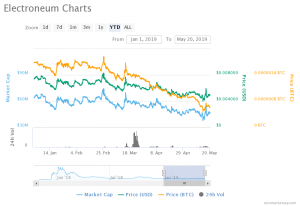 Looking at the price prediction, it is advised to buy ETN coins now. But, the long term holding is the key. Short-term investors will be profitable if they play keeping resistance level in mind.

Is Bitcoin Moving Towards the $10000 Mark Already?

Binance Launchpad Stirs the Market, as its Coins Hit Returns of 620% and 787%