EOS (EOS) is a blockchain protocol that inculcates a number of the features of a real-world computer which include hardware devices like CPUs & GPUs. In addition to that, EOS has RAM, hard-disk storage, and other computing resources, which are segregated proportionately among various crypto holders. Just like Ethereum, EOS.IO is also based on a smart contract mechanism and has a decentralized operating system. The main aim of the smart contract and decentralized OS is to help users in deploying industrial-scale dapps through an autonomous business model. On top of that, the technology claims to eliminate transaction fees by a huge margin, with a massive increase in transactions speed. Designed to enable horizontal as well as vertical scaling of dapps, EOS (EOS) software provides features like accounts, authentication, databases, asynchronous communication and the scheduling of apps across a number of CPU cores or clusters. 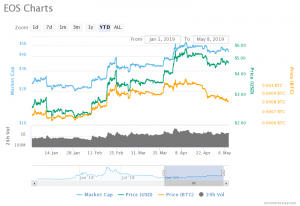 Following the market trend, there seems to be a bearish trend in EOS as well. However, there is a piece of good news for the crypto as well. According to dapp.net, the total number of active dapps on the EOS network, which was 355 in January rose up to 502 at present. Along with that, EOS dominates the market when it comes to transaction number and transaction volumes, leaving its nearest contenders, Tron and Ethereum, far behind. As of now, there is no official confirmation, but there is speculation that the EOS team might come up with some groundbreaking updates as the developers have maintained silence for quite a long time now. According to experts, EOS has the potential to replace Ethereum and place itself as the default chain for the development of dapps. Although the short and medium-term trend is bearish, as per our speculation, EOS (EOS) might hit the mark of 10 USD by the end of the year.