Ethereum (ETH) is teaming up with one of the world’s biggest electrical utility company, EDF. This company has a market capitalization of over $33 billion. EDF has launched its visual simulator software GPUSPH on Ethereum’s dApp called iExec. This will enable EDF to test the program operation on the Ethereum network rather than a normal computing operating system environment. EDF blockchain engineer Gilles Deleuze said, “In a wider perspective, […] development of distributed computing is a credible scenario for the future, and blockchain may be a nice lever in this scenario. So, let’s explore it.” We predict the value of Ethereum to reach 300 USD in no time. By the end of 2019, the value should rest somewhere around 450 USD. Let’s now look at the current figures of Ethereum. 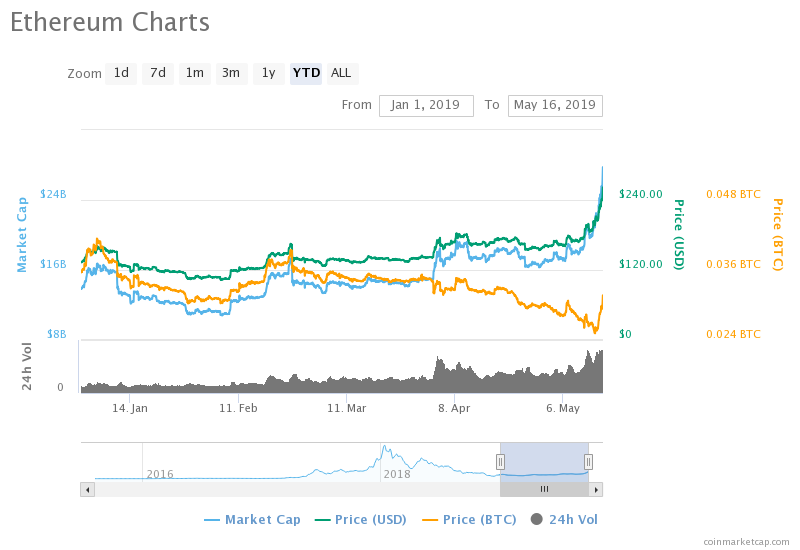 Ethereum (ETH) has always been able to sustain its old market reputation, and it can clearly be seen on its growth pattern. The lowest point of Ethereum since the starting of the year 2019 is on 7th February at 104 USD. The highest point for Ethereum in this year comes with the current value of 261 USD. The market cap on 16th April was 17,335,903,443 USD and the value of each Ethereum coin was 164.04 USD. The current market cap, as well as value in USD, is respectively 60.09% and 59.47% more than the data of the previous month.

As there are loads of associations and teaming ups happening for Ethereum, the increasing goodwill of the coin will give a boost to the value as well. The current 260 USD will face resistance at 280 USD and 295 USD. By the end of 2019, the value should go as high as 450 USD.

Though buying fresh coin is not very profitable, holding existing coins until the 2nd quarter of 2020 will give a huge profit.

Ethereum Platform Hits the Right Chord; Worth Investing in ETH